Kyle Rittenhouse has announced that he is launching a new project to help people who are being libeled and slimed by the media.

Appearing on Tucker Carlson Tonight, Rittenhouse also announced that he intends to sue Cenk Uyghur, Whoopi Goldberg, and others who lied about him.

“Me and my team have decided to launch The Media Accountability Project as a tool to help fundraise and hold the media accountable for the lies they said and deal with them in court,” Rittenhouse said.

TUCKER: “Will you be suing any news organizations?”

KYLE RITTENHOUSE: “We’re looking at quite a few, politicians, athletes, celebrities, Whoppi Goldberg is on the list, she called me a murderer after I was acquitted… So is Cenk [Uyhur] from the Young Turks.” pic.twitter.com/MULZf38Vkf

Rittenhouse fatally shot Joseph Rosenbaum, 36, and Anthony Huber, 26, and shot and wounded Gaige Grosskreutz, 26, during a riot in Kenosha in August 2020. A jury determined that the teenager was acting in self-defense and he was found not guilty across the board.

The verdict did not stop many in the media from continuing to brand him a “murderer.”

When asked if he will be suing any media outlets, Rittenhouse named some of the people who are currently on his list.

“Well, right now, we’re looking at quite a few politicians, celebrities, athletes, Whoopi Goldberg’s on the list,” Rittenhouse said. “She called me a ‘murderer’ after I was acquitted by a jury of my peers. She went on to still say that.”

Rittenhouse pointed out that Uyghur was calling him a “murderer” before the trial and “continues to call me a ‘murderer.'”

Rittenhouse recently met with former President Donald Trump, who claimed that he was a victim of prosecutorial misconduct.

“What he went through! That was prosecutorial misconduct. He should not have had to suffer through a trial for that. He was going to be dead,” Trump said during an interview with Sean Hannity after their meeting. “If he didn’t pull that trigger, that guy that put the gun to his head, in one quarter of a second he was going to pull the trigger, Kyle would have been dead.”

“He’s a really good young guy. He’s eighteen years old, just left Mar-A-Lago a little while ago, and he should never have been put through that,” Trump added. 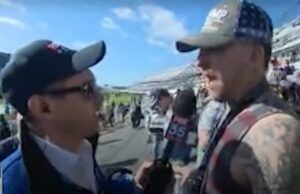