A Wisconsin judge is set to hear arguments Friday on whether prosecutors should hold Kyle Rittenhouse’s rifle and other personal belongings that were seized during his trial.

Rittenhouse shot three men during a protest in Kenosha in August of 2020. Anthony Huber and Joseph Rosenbaum died from their wounds, while Gaige Grosskreutz recovered from a gunshot wound in the arm.

Rittenhouse asserted he had acted in self-defense after each of the men attacked him during the riot. In December, a jury acquitted him of all charges, including homicide.

Rittenhouse’s attorney, Mark Richards, filed a motion on January 19 asking prosecutors to return Rittenhouse’s rifle, ammunition, face mask, and clothing he was wearing during the incident.

Last week, representatives for Rittenhouse said he wanted to destroy the rifle and discard the rest of the items so nothing could be used as a political symbol or trophy of the shootings.

The motion hearing has been set before Judge Bruce Schroeder, the Kenosha County judge who handled Rittenhouse’s initial trial.

Rioters participated in violent demonstrations for multiple nights in Kenosha in August 2020 after a white police officer shot Jacob Blake. Blake was a black man shot in the back as he was resisting arrest during a domestic disturbance. Blake was paralyzed from the waist down as a result.

The protests turned violent, with people burning buildings and assaulting bystanders. Rittenhouse and friend Dominick Black joined a group of local residents to protect a used car lot on the night of August 25.

Rittenhouse, who was 17 at the time, was armed with an AR-15-style rifle purchased for him by Black earlier that year. Black purchased the gun because Rittenhouse was too young to buy a firearm under Wisconsin law.

Black agreed that the rifle would become Rittenhouse’s property on his 18th birthday, according to the newly filed motion.

According to multiple sources of video, just before midnight on August 25, Rosenbaum chased Rittenhouse down, and the teenager shot him in self-defense. Rittenhouse also shot Huber after he swung a skateboard at his head. Rittenhouse also fired on Grosskreutz after he ran up to him holding a pistol.

Everyone involved in the shooting was white, contrary to multiple reports by the media. 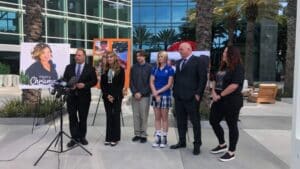 Mother of Three, 45, Dies of COVID After Being Denied Vaccine and Monoclonal Antibody Treatment