Kaliningrad is a Russian territory that borders Lithuania, Poland and the Baltic Sea

The governments of Russia and Lithuania are sparring over a new ban on rail transportation of goods to a Russian port enclave.

Lithuania’s state-owned railway blocked the shipment of certain goods to Kaliningrad, a Baltic port, on June 18. The Russian territory is surrounded by Poland and Lithuania and is only accessible to Russia by sea.

Lithuanian Foreign Minister Gabrielius Landsbergis defended the decision on June 20, saying the move was part of the European Union sanctions levied against Russia in the wake of its invasion of Ukraine.

“It’s not Lithuania doing anything: it’s European sanctions that started working from 17 of June,” said Landsbergis in a statement. “Sanctioned goods (will) no longer be allowed to transit Lithuanian territory.”

The list of prohibited goods includes coal, metals such as steel and iron, construction material and advanced technology.

Goods are typically transported to the area via trains, which travel from Belarus to Lithuania.

“If cargo transit between the Kaliningrad region and the rest of the Russian Federation via Lithuania is not fully restored in the near future, then Russia reserves the right to take actions to protect its national interests,” the Russian Foreign Ministry said in a statement, per the Independent.

The governor of Kaliningrad, Anton Alikhanov, has reportedly estimated that 50% of the goods brought to the region could be affected by the ban.

The main base for Russia’s Baltic Fleet as well as its 11th army corps is in Kaliningrad. The region also houses “an arsenal of advanced weaponry, including hypersonic Kinzhal missiles and nuclear-capable Iskander launchers,” reports The Sunday Times.

“This decision is really unprecedented. It’s a violation of everything,” said Kremlin spokesperson Dmitry Peskov to reporters, per Reuters. “We consider this illegal. The situation is more than serious … it requires in-depth analysis before we formulate our response and next steps.”

An estimated 430,000 people live in Kaliningrad. No transit exists between the enclave and Poland. Residents are currently relying on ferries between Kaliningrad and Saint Petersburg to move the now restricted materials.

The Russian government plans to add seven additional ferries to the route by the end of 2022. 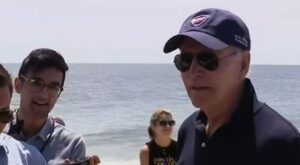 Biden Scolds Reporter for Asking About a Recession, 'Now You Sound Like a Republican Politician'