The Republican attorney general filed the lawsuit in November alongside leaders in Ohio and Tennessee, where the resulting injunction is also in effect. The lawsuit asserts the president’s mandatory vaccination requirement is “unlawful and unconstitutional.”

Sheriffs’ offices, along with other industries in Ohio, have federal contracts and rely on them for workers, so the mandate could lead to severe job losses, said a press release from Ohio Attorney General Dave Yost’s office at the time.

The mandate requires all employees, contractors and subcontractors related to the United States government to receive the vaccine in order to continue gainful employment. The mandate also applies to all employers in the U.S. with 100 or more employees.

Judge Tatenhove, Daniel Cameron and others in the region have taken a closer look at the impact of this mandate. In Kentucky, Tennessee and Ohio, the economic impact of government contractors and subcontractors has an annual value of over $29 billion. Enforcing this mandate is expected to have devastating consequences for the local economy.

Tatenhove added: “The court is also concerned that the vaccine mandate intrudes on an area that is traditionally reserved to the states.” The matter will “continue with the benefit of full briefing and appellate review.” Until then “enforcement of the contract provisions in this case must be paused.”

The order states that “the government is ENJOINED from enforcing the vaccine mandate for federal contractors and subcontractors in all covered contracts in Kentucky, Ohio and Tennessee.” Details of exactly which contractors would be covered were not immediately clear from the order issued by Tatenhove.

The scope of the issue that Tatenhove was focused on was to determine if Biden had the authority to require vaccines of government contractors and subcontractors. In his opinion, the answer is a definitive “No.”

Tatenhove, Cameron and others agree that the mandate issued by Biden goes well beyond his congressionally authorized ability to issue such mandates and statutes. Even for the purpose of limiting the spread of COVID-19, this overreach must be held in accountability to the laws and regulations set forth in the U.S.’s governing documents.

The mandate is set to take effect on Jan. 4. 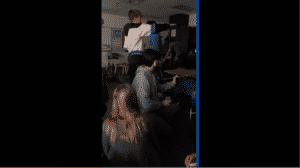