Allison Fluke-Ekren will remain in federal custody while waiting for her terrorism trial.

Her request for bail was denied in a Virginia court on Feb. 3.

Judge Ivan Davis said the woman, who is identified by her surname Ekren, said the court considered the safety of the local community and pre-trial services reports as part of bond hearings.

The 42-year-old former Kansas teacher allegedly leads a female Islamic State fighting squadron. The details of her introduction and ascension to the terror group remain unclear.

Ekren is accused of training children to use machine guns and planning a “violent jihad.”

One federal witness reportedly told the federal U.S. prosecutors that Ekren’s ideology was “a ’11 or a 12′ on a scale of 1 to 10, with 10 being extremely radicalized.”

According to the BBC, public records indicate “Ekren spent time living in the Middle East in the late 2000s with her then-husband and children, splitting time abroad with visits back to Kansas. She recorded details of what appeared to be a normal life on a blog from 2008-10.”

Ekren moved to Egypt with her husband, a Turkish man known as Volkan Ekren, and children in 2008. During this time she ran a blog called “4 Kansas Kids” which documented their travel. The family then migrated to Libya. Her husband was an ISIS sniper trainer.

U.S. authorities had said Ekren was smuggled into Syria in 2012 and married several Islamic State operatives.

“Fluke-Ekren and her husband allegedly brought $15,000 into Syria to buy weapons, grenades and other military supplies,” per The Sun.

Prosecutors say she has been actively involved in ISIS since 2014.

As part of her efforts for the terrorism group, Ekren allegedly trained women and girls to use AK-47s, bombs, and suicide vests. She was accused of leading the all-female ISIS battalion, Khatiba Nusaybah.

She is also said to have translated speeches for ISIS leaders, lodging members, and taught extremist ISIS doctrine.

In 2016, her husband died in an airstrike during an attempted terrorist attack.

Witnesses have told the FBI that Ekren discussed attacking an American shopping mall by detonating explosives in the parking lot or a college campus by planting backpacks of explosives.

Ekren’s parents and two children, her only known family in America, requested earlier this week that she be prohibited from contacting them.

The case is being tried in the Eastern District of Virginia by U.S. attorneys Raj Parekh and John T. Gibbs.

“Fluke-Ekren has been a fervent believer in the radical terrorist ideology of ISIS for many years, having traveled to Syria to commit or support violent jihad,” Parekh said in a Jan. 28 memo.

If convicted, Ekren could face 20 years in prison. 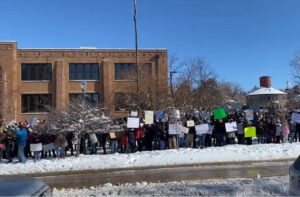