All the other justices have been wearing masks — except Justice Sonia Sotomayor, who has been participating from her chambers via microphone.

Chief Justice John Roberts requested all the justices wear masks while serving in person following a request from Sotomayor, according to a report from NPR.

Sotomayor, an Obama appointee, has diabetes and is therefore considered at a higher risk of developing a severe case of COVID-19 should she contract the virus. She wore a mask while on the bench last fall when COVID-19 cases declined, although none of her colleagues did. The justice is reportedly growing increasingly concerned about the number of rising cases of the omicron variant.

All nine justices have been administered the COVID-19 vaccine and have received booster shots.

Gorsuch, who has not made a public comment about his decision not to wear a mask, sits next to Sotomayor on the bench. The 54-year-old also does not wear a mask at the justices’ weekly meetings, which prompted Sotomayor to participate via telephone.

“Last week, Gorsuch was the only justice in the courtroom not to wear a mask during oral arguments, while Sotomayor and Justice Stephen Breyer both appeared remotely,” per CNBC. “Breyer, at 83 the oldest member of the court, stayed out of the courtroom after a spokesperson said he received the results of a COVID test that were later determined to be a false positive.”

Last week, the nation’s highest court ruled that the Occupational Safety and Health Administration could not require businesses with more than 100 employees to enforce vaccine-or-test policies.

The mandate would have impacted an estimated 84 million Americans.

Attorneys are required to wear a mask at all times inside the building unless they are actively eating or drinking, according to rules set out by the Court in December. While in the Courtroom, they must wear an N95 or KN95 mask, “except when presenting an argument.”

The morning before their arguments, all attorneys participating must take a PCR COVID-19 test at a facility in Washington D.C. The Court covers the cost.

Counsel that tests positive are only permitted to present their argument via telephone.

The rules do not specify a mask policy for the justices.

Editor’s Note: The Supreme Court has denied the allegations in the NPR report referenced above. More on that can be found here. 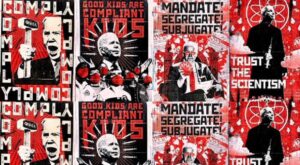