DOJ warns that the states risk action by the federal government, including losing federal funding for state programs

On Thursday, the U.S. Department of Justice sent a letter reminding all states that there are federal constitutional and statutory provisions to safeguard transgender youth against discrimination and withholding gender-affirming care.

“(The DOJ) is committed to ensuring that transgender youth, like all youth, are treated fairly and with dignity in accordance with federal law,” the letter reads. “This includes ensuring that such youth are not subjected to unlawful discrimination based on their gender identity, including when seeking gender-affirming care.”

Clarke goes on to remind the attorneys general that passing legislation banning or prohibiting gender-affirming care is a direct violation of federal interests.

“A law or policy need not specifically single out persons who are transgender to be subject to heightened scrutiny. When a state or recipient of federal funds criminalizes or even restricts a type of medical care predominantly sought by transgender persons, an intent to disfavor that class can ‘readily be presumed'” — the letter reads, citing a 1993 Supreme Court decision involving anti-abortion protestors.

“For instance,” Clarke continued, “a ban on gender-affirming procedures, therapy, or medication may be a form of discrimination against transgender persons, which is impermissible.”

A more stark warning from the Department of Justice notes that any entity receiving funding from the United States Government, such as the local and state governing bodies, must comply with nondiscriminatory laws or risk losing their funding: “many federal statutes require recipients of federal financial assistance to comply with nondiscrimination requirements as a condition of receiving those funds.”

The letter was issued alongside recommendations from the Department of Health and Human Services on Thursday. The HHS released documents outlining the support and proper care of gender-affirming care and procedures for transgender children.

Also, on Wednesday, President Biden released a statement in honor of International Transgender Day of Visibility.

“In the past year, hundreds of anti-transgender bills in states were proposed across America, most of them targeting transgender kids,” he said. “The onslaught has continued this year. These bills are wrong.”

The letter from the Department of Justice, the President’s statement, and the HHS recommendations come at a time when multiple states have passed laws impacting transgender youth.

On Wednesday, the governors of Oklahoma and Arizona signed legislation stopping transgender girls and women from competing in school sports.

Arizona Governor Doug Ducey signed a bill limiting healthcare for transgender youth even when doctors say that the treatment is medically necessary,

The letter sent from the Department of Justice appears to signal an attempt by the Biden Administration to prohibit or limit the ability of state leadership to enact laws banning the complete and supportive care of gender-affirming surgeries, hormone therapy, and any other transgender care for children. 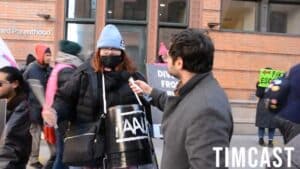