Three former Minneapolis police officers who were with Derek Chauvin during the death of George Floyd were found guilty on Thursday of violating his civil rights.

Tou Thao, J. Alexander Kueng, and Thomas Lane had all been charged with deprivation of rights under color of law for depriving the right of medical care to Floyd while Chauvin was pinning him down.

Kueng and Thao were additionally found guilty of failing to intervene during the incident.

“During the monthlong trial, prosecutors sought to show that the officers violated their training, including when they failed to move Floyd or give him CPR. Prosecutors argued that Floyd’s condition was so serious that even bystanders without basic medical training could see he needed help,” WBAL reports. “The defense said their training was inadequate and that the officers deferred to Chauvin as the senior officer at the scene.”

The report added, that “the jurors were not sequestered — isolated from outside influences that could sway their opinion — which is sometimes done by having them stay in hotels during deliberations. They were allowed to watch videos from the scene and view other evidence as much as they wanted during deliberations.”

Prosecutors argued in their closing statement that the three men “chose to do nothing” while Floyd was being killed.

“It wasn’t a split-second use of force like a gunshot,” Assistant US Attorney Manda Sertich said during closing arguments. “Not 30 seconds, not a minute, several minutes — 569 seconds.”

Thao’s lawyer had argued in his closing arguments that “just because something has a tragic ending doesn’t mean it’s a crime.”

“We don’t need commanders to tell us that if someone has seniority over you, you listen to them,” Lane’s attorney, Earl Gray, told the court Tuesday, according to a report from CNN. “It’s common sense.”

“They didn’t have to intend to harm Mr. Floyd,” Assistant US Attorney LeeAnn Bell argued. “They just needed to know they could take certain actions under the law and failed to do so.”

All three are scheduled to return to court on separate charges of aiding and abetting murder and manslaughter on June 13.

The former officers will remain free on bond until their sentencing, a date for which has not been set. They are all potentially facing life in prison.

Chauvin was convicted of murder and manslaughter in a separate trial and has since pleaded guilty to a federal civil rights charge. 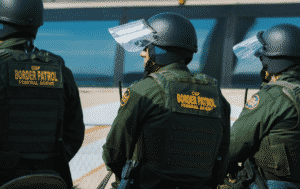