A male juror was dismissed from Kyle Rittenhouse’s trial after making a remark about Jacob Blake and the number of times he was shot.

According to the Prosecution, the juror asked, “Why did the Kenosha police shoot Jacob Blake seven times? Because they ran out of bullets.”

They said the joke showed poor taste and racial bias.

Jacob Blake, a black male, was shot by a white police officer in Wisconsin in August of 2020. The officer and his partner were trying to serve Blake with an outstanding warrant for his arrest. They had been called to the scene because of a reported domestic dispute. Blake confirmed he was carrying a knife during the interaction.

Officer Rusten Sheskey said he feared Blake would stab him, which Blake denied. After seven shots were fired, Blake was left partially paralyzed. A judge rule in January 2021 that Sheskey acted in self-defense.

Kenosha County Circuit Judge Bruce Schroeder announced the dismissal on Nov. 4, noting the potential impact the juror’s comment could have on the trial.

“It’s clear that the appearance of bias is present and it would seriously undermine the outcome of the case,” Schroeder said regarding the dismissal.

The juror told the judge the comment did not have “anything do with” with the trial.

“The juror’s dismissal cuts the number of jurors to 19. Nine men and 11 women were selected from the field of 150 potential jurors for the trial on the first day of the trial, and the number of jurors will be cut to 12 to reach a verdict,” reports UPI. “ The process of selecting 12 impartial jurors was made difficult due to the high-profile nature of the case.”

On Aug. 25, 2020 — during the protest and riots following Blake’s shooting — Kyle Rittenhouse fatally shot two people, Anthony Huber, 26, and Joseph Rosenbaum, 36, and injured Gaige Grosskreutz, now 27. Rittenhouse, who was 17 at the time, was carrying an assault-style rifle. His lawyers have argued that a cellphone video of the incident confirmed he acted in self-defense.

The trial is expected to last two or three weeks. 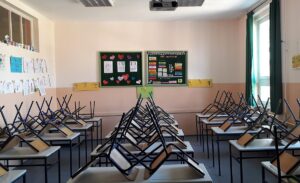