Letitia James's attempt to shutter the National Rifle Association has been halted, although the case over financial mismanagement stands

James has alleged that top NRA executives have illegally diverted tens of millions of dollars from the organization.

In his order, Judge Joel M. Cohen wrote that the suit depicts a “grim” situation of “greed, self-dealing, and lax financial oversight.” He said if the allegations are proven, they can be addressed with “targeted, less intrusive relief,” such as fines and remuneration.

Cohen found that the allegations, including officials’ misspending on personal trips and no-show contracts, are no justification for the “corporate death penalty” that James has requested.

The judge stated the attorney general’s office had not proven that the alleged mismanagement of the NRA’s finances had produced public harm. He cautioned that dissolving the NRA could impact the free-speech rights of its national members.

“The Complaint does not allege that any financial misconduct benefited the NRA, or that the NRA exists primarily to carry out such activity, or that the NRA is incapable of continuing its legitimate activities on behalf of its millions of members,” Cohen wrote. “In short, the Complaint does not allege the type of public harm that is the legal linchpin for imposing the ‘corporate death penalty.'”

On Wednesday, NRA president Charles Cotton praised the ruling as a “resounding win” for the organization in a statement.

William A. Brewer III, an attorney for the NRA, said that his firm looks forward to proving that the NRA acts in the best interest of its members and their belief in Second Amendment freedoms.

In a statement, the attorney general noted that her office is both “heartened” and “disappointed” by the ruling.

“While we’re heartened that the judge rejected the NRA’s attempts to thwart most of the claims in our case against the NRA, we are disappointed that the judge ruled against the dissolution portion of the case,” James said. “We are considering our legal options with respect to this ruling. We remain committed to enforcing New York law regardless of how powerful any individual or organization may be.”

The court let stand all of the Office of the Attorney General’s claims of self-dealing, abuse, and unlawful conduct by Wayne LaPierre, who has led the NRA for more than 30 years. 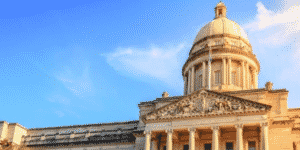