Ohio Congressman Jim Jordan is expected to lead a new subcommittee to be formed by the House of Representatives that will investigate abuse of power by federal officials.

The Weaponization of Government committee would request and review the emails between the Biden administration and technology and social media companies that were made public through the Twitter Files. An impending House resolution indicated the 13 members will serve on the committee which will complete “a full and complete investigation and study” to be finalized by Jan. 2, 2025.

Ultimately, the investigation will determine the extent to which the tech companies were coerced or pressured to censor controversial topics to benefit the Democratic party or the presidential administration.

“The Twitter Files showed unequivocally that the Biden administration, as well as those within the campaign leading up to the 2020 election and pro-Biden personnel in federal government, worked to suppress information that would have been detrimental to Biden,” reports The Post Millenial. “This suppression was undertaken by telling Twitter, and other tech companies, that so-called misinformation would be emerging that targeted Biden’s youngest and only living son Hunter Biden.”

The Biden administration denounced the potential committee as a “pointless political stunt.”

White House spokesman on investigations Ian Smith tweeted on Dec. 30 that House Republicans were using the investigation to “get themselves booked on Tucker Carlson, instead of working with [Biden] or congressional Dems to take on the issues Americans care about like tackling inflation and lowering costs.”

The committee’s formation was secured during last week’s Speaker of the House negotiations. California Congressman Kevin McCarthy ultimately secured the leadership position after a historic 15 rounds of voting.

While addressing Congress after his swearing-in, McCarthy vowed to “fix the nation’s urgent challenges — from wide-open Southern borders, to America last energy policies, to woke indoctrination in our schools.” He also said he would “hold ‘the Swamp’ accountable — from the withdrawal [from] Afghanistan to the origins of COVID and to the weaponization of the FBI.”

McCarthy has already announced the bipartisan Select Committee on China which will investigate how to bring back “the hundreds of thousands of jobs that went to China,” per Axios.

Although Jordan was one of more than a dozen representatives who nominated McCarthy, he was nominated for the speakership by a number of his colleagues. Jordan is set to chair the Judiciary Committee during the 118th Congress.

“I want to chair the Judiciary Committee,” Jordan told reporters at the Capitol. “I like this ability to cross examine witnesses and get the truth for the country.”

Jordan sent letters to the CEOs of Apple, Amazon, Alphabet, Meta, and Microsoft in December requesting an explanation of “the extent and nature” of each companies’ “collusion with the Biden Administration.” He also told the companies to preserve any records related to his request for “moderation, deletion, suppression, restricting or reduced circulation of content.” 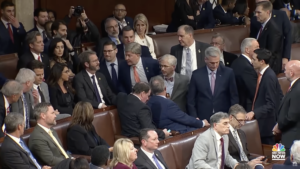