Psaki accused the GOP of blocking the confirmation of David Chapman as the Bureau of Alcohol, Tobacco, Firearms and Explosives (ATF) Director.

“We are disappointed by the fact that many Republicans are moving in lock-step to hold up his nomination and handcuff the chief federal law enforcement agency tasked with fighting gun crimes. It speaks volumes to their complete refusal to tackle the spike in crime we’ve seen over the last 18 months,” said Psaki.

PSAKI: Republican opposition to David Chipman as ATF Director "speaks volumes to their complete refusal to tackle the spike in crime we've seen over the last 18 months." pic.twitter.com/L75DHcEc6A

The Press Secretary’s comments are in stark contrast with the DC Chief of Police, who blames local politicians and progressive policies for “coddling violent criminals.”

“It’s unacceptable in any community … This should be shocking to the conscience of every person in our city. I don’t care where you live, it has the attention that it is gotten now because it’s happened where it happened,” said DC Police Chief Robert Contee.

“The justice system we have right now is not functioning the way that it should. The courts are not open. That is a fact. Barely open. So cases from last year … have not been disposed of, what do you think those individuals are?” he added.

“This was real for some people, but it has been happening in communities all across the city … You cannot coddle violent criminals,” stated the capital’s Top Cop. 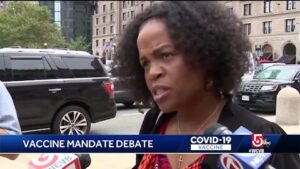