The event will also mark the third of what Blue Origin hopes will be many space tourism launches carrying well-heeled customers to the edge of space — an experience that, as of now, carries a multi-million dollar price tag.

Bezos and the team have hopes that this is a line of business will help fund Blue Origin’s more ambitious space projects, which include developing a 300-foot-tall rocket powerful enough to blast satellites into orbit and a lunar lander in the not-so-distant future.

The company was recently passed over for a highly coveted NASA contract to build a lander that will put humans back on the moon for the first time in about 50 years. Blue Origin lost the bid to its chief competitor, Elon Musk’s SpaceX.

Despite Blue Origin’s attempt to escalate the battle in federal court, the appeal bid was turned down.

Blue Origin is also still facing criticism after a former employee published an essay alleging the company fosters a toxic workplace environment and is riddled with safety issues. The Federal Aviation Administration, which licenses commercial launches, said it is reviewing these allegations.

Blue Origin has repeatedly denied the allegations and has said that safety is its top priority.

Today’s launch of the New Shepherd rocket will join the ranks of multiple other space tourism experiences provided by Blue Origin, SpaceX and Virgin Galactic. 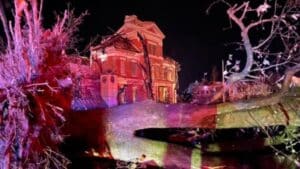 Death Toll Over 50 as Tornadoes Rip Through Heartland