The 49-year old California resident fled the U.S. after being charged with criminal activity in connection with the Washington D.C. event

State media in Belarus reported Tuesday that Evan Neumann, who is wanted for his alleged role in the Jan. 6 Capitol riot, has been granted asylum in Belarus.

Neumann fled to Europe after the events of Jan. 6 landed him on the FBI’s wanted list. He temporarily resided in an apartment he rented in Ukraine before crossing into Belarus on foot late last year.

Belarusian state television detailed his entry into the country when they interviewed Neumann for a television special. He told reporters he thought Ukrainian security service agents were pursuing him, so he fled to Belarus.

On Tuesday, state-owned television network BelTA posted a video where Neumann is pictured signing a migration document and shaking hands with a police official. According to English subtitles posted with the video, “Now you are completely under the protection of the Republic of Belarus.”

“Today, I have mixed feelings,” Neumann told BelTA. “I am glad Belarus took care of me. I am upset to find myself in a situation where I have problems in my own country.”

Neumann fled the United States last year after being charged in D.C. for participating in numerous violent acts against law enforcement during the events of Jan. 6. An arrest warrant was issued for Neumann in December of 2021.

The FBI alleges that he not only used his hands and fists to strike the officers but also used a metal barricade as a battering ram. Justice Department records show that over 200 people have been charged with assaulting, resisting, or impeding officers during the Jan. 6 events.

Belarusian President Alexander Lukashenko and Russian President Vladimir Putin have frequently referenced the Capitol riot. Both leaders have called the prosecution of those involved a double standard by the United States because it often criticizes similar reactions to anti-government protests in other countries.

In an interview in Belarus last Fall, Neumann said the country did him “a big favor” and promised to be “a productive and a good citizen.” Neumann also recalled living in Moscow in 1994 and complained that Russia and Belarus are being “demonized” by the Western media.

During his interview, Neumann discussed “political repressions” and argued that the criminal charges against him are unfounded. He accused the U.S. government of staging an elaborate set-up on Jan. 6. Neumann claimed that the doors of the Capitol “were opened from the inside, and we were invited to come in.” 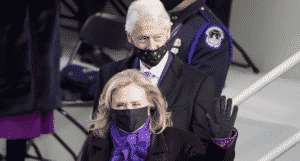 Hillary Clinton Announces She Has Tested Positive For COVID-19