Republican J.D. Vance has defeated Democrat challenger and former Representative Tim Ryan despite the latter’s effort to distance himself from President Joe Biden.

Vance, who will take his oath of office in January, has promised to build a populist coalition that defies what he characterizes as the Democrat’s “war” on the middle and lower class and on the economy as a whole. What initially appeared to be a tight contest as votes began trickling in quickly devolved into a landside with Vance holding a seven point lead over Ryan as networks began calling the race in his favor.

Vance, who initially characterized himself as a “Never Trump guy,” began signaling a change of heart in 2018. Vance began describing then-President Trump as “one of the few political leaders in America that recognizes the frustration that exists in large parts of Ohio, Pennsylvania, eastern Kentucky and so forth.”

At that time, Vance was pondering taking his first shot at the United States Senate with his eye on incumbent Democrat Sherrod Brown’s seat. Ultimately, he decided not to throw his hat into the ring until Republican Senator Rob Portman announced he was no longer seeking re-election.

At a rally alongside Trump on the eve of the election, the former president repeatedly urged voters to come out in support of Vance.

“We are a nation in decline. We are a failing nation,” Trump said and Vance later promised the audience that his time in Washington will be without compromise.

“When we get to Washington D.C., Republicans, we need to govern like we won the majority the American people gave us, not like a bunch of cowards,” he said.

Vance, who attended Yale Law School, rose to fame with the publication of his memoir Hillbilly Elegy. 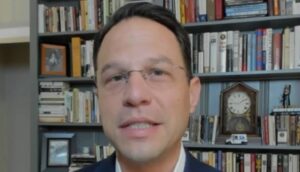