Israel Adds US to 'No Fly' List, Cites Omicron

Israel announced a ban on travel to the United States on Monday, citing concerns about the omicron COVID-19 variant.

Israelis will need special permission to travel to the US beginning on Tuesday, according to their “no-fly” policy.

The move is likely to be controversial, as approximately 10 percent of Israel has dual citizenship.

The nation has now added more than 50 countries to its “red” level travel list. Israelis already in a “red” country must quarantine when they return home.

According to a report from Reuters, Prime Minister Naftali Bennett said on Sunday that Israel had bought time to prepare for omicron because they moved so swiftly to enact travel restrictions.

“The time we bought is running out,” Bennett said during a press conference. “The numbers are still not high, but it’s a very contagious variant, doubling itself every two-three days, as we see around the world.”

Bennett added that “it’s possible to say that the fifth wave has begun.”

“Our goal is to brave this wave without it affecting the economy and education as much as possible,” he said. “The way to achieve that is by slowing down the infection rate, and vaccinating Israeli children in the meantime as quickly as possible.”

The Reuters report noted that Israel, so far, has reported 134 cases of omicron and another 307 that are suspected to be the variant. The Health Ministry says that 167 of the cases were symptomatic.

The prime minister urged people to get vaccinated and use other precautions to help prevent the spread.

Israel also banned travel to France, Ireland, Norway, Spain, Finland, Sweden and the United Arab Emirates on Sunday. They joined Britain, Denmark and most of Africa — which were already listed as “red.”

The Health Minister has also advised that Canada, Belgium, Italy, Germany, Hungary, Morocco, Portugal, Switzerland and Turkey be added to the red list, but those had not yet been approved at time of publishing.

Non-Israelis from red-listed countries are barred from traveling there. 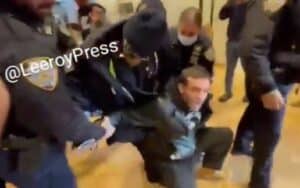 WATCH: Man Arrested at Panera Bread in Brooklyn For Attempting to Eat Without a Vaccine Passport