Gov. Kim Reynolds said 'The American people are left to feel like they're the enemy'

She began her response by saying that it feels as if Biden and his administration “have sent the country back in time to the late-1970s and early 80s when runaway inflation was hammering families, a violent crime wave was crashing our cities, and the Soviet army was trying to redraw the world map.”

For 15 minutes, standing in front of the Iowa state capitol in Des Moines, Reynolds strongly criticized Biden’s international and domestic record, calling for the President to place trust back in the American people.

Reynolds said, when Biden was elected, he promised to make America respected again on the world stage and unite the country.

“He’s failed on both fronts,” she said

She said the “disastrous” Afghanistan withdrawal betrayed American allies and emboldened our enemies. She pointed to Ukraine by saying that Americans should stand in support of the people of Ukraine as they battle the Russian onslaught. However, she said Americans shouldn’t overlook Biden’s actions leading up to the invasion.

“Waiving sanctions on Russian pipelines,” she said. “Eliminating oil production here at home. Focusing on political correctness rather than military readiness. Reacting to world events instead of driving them.”

Reynold said it was time for America to lead again on the world stage, “but we can’t project strength abroad if we’re weak at home.”

Reynolds blamed Biden for ignoring Republican cautions that expanded government spending would result in inflation. She said he was warned the administration’s anti-energy policies would lead to soaring gas prices but ignored it. Reynolds said inflation is not a “high-class problem” but an “everybody problem.”

The Iowa Governor said Biden and his administration need to make it a point to talk to regular Americans about their concerns and “what keeps them up at night.”

She said people are fed up with proposed vaccination requirements for people who want to work but not for immigrants who cross the border illegally.

“The American people are left to feel like they’re the enemy,” she said.

Reynolds gave credit to Republican governors who she said “listened to science” by not requiring masks for kids at schools. She noted that school shutdowns have led to learning loss, isolation, and anxiety among America’s kids. 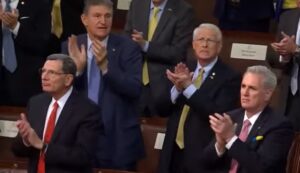 Sen. Joe Manchin Sits on Republican Side During State of the Union