A transgender Minnesota inmate is suing the Department of Corrections for “discrimination” because they denied a request for gender reassignment surgery.

The inmate, Christina Lusk, 56, is also requesting to be moved to a women’s prison for the remainder of their sentence.

Lusk is currently imprisoned at Minnesota Correctional Facility in Moose Lake for a felony drug offense and is scheduled to be released in 2024.

The lawsuit, filed by an organization called Gender Justice on behalf of Lusk, alleges that “Lusk is a transgender woman who is currently in the custody of the DOC. She is recognized legally and socially as female – including by the State of Minnesota. Yet, the Minnesota DOC treats Ms. Lusk as a man simply because she is transgender.”

“The DOC is housing Ms. Lusk at Minnesota Correctional Facility – Moose Lake (‘Moose Lake’), a men’s facility. The DOC has placed Ms. Lusk at Moose Lake, rather than at the women’s facility, Shakopee, because she is transgender. Upon information and belief, the DOC makes their 2 gender-based placement on genitalia, in violation of the Minnesota Human Rights Act, the Minnesota Constitution, and the Prison Rape Elimination Act (‘PREA’),” the lawsuit continues.

According to the lawsuit, Lusk began taking hormones in 2009, received breast implants in 2017, and changed their name in 2019.

Lusk’s representation alleges that the inmate has been subjected to “discrimination and harassment” because the DOC was using their birth name.

DOC Medical Director James Amsterdam, according to the complaint, had determined that it would be best for Lusk to seek the genital alteration surgery after their release.

“Lusk has also been denied medical care while in the DOC. In spite of her documented medical need, the DOC arbitrarily deferred Ms. Lusk’s gender-affirming surgery until after her release in 2024,” the lawsuit states.

In December, 2018, Lusk was arrested. Lusk’s legal team maintains that at the time of the arrest, the inmate was actively consulting with a surgeon to receive a vaginoplasty.

In 2019, Lusk filed a complaint with the DOC seeking a vaginoplasty while incarcerated, writing, “I have been diagnosed with severe Gender Dysphoria. I have attempted suicide four times due to my severe distress caused by my GD as well as self mutilation. My mental capacity is under control, and I am able to make good decisions as far as surgery. I have letters of support from my primary physician, my gender specialist, my therapist, as well as my psychiatrist, only two letters are required for surgery but I go up and beyond what is required.”

Lusk is seeking “no less than $50,000” in financial compensation, the vaginoplasty, and to be treated as a woman and moved to the women’s facility.

It was reported in April that inmates at a New Jersey prison, which houses 27 transgender inmates, have been impregnated.

On November 17, 2021, Women’s rights organization, the Women’s Liberation Front, filed a civil rights lawsuit in California against biological men being housed with women. Their next arguments are due to the court on June 10, 2022.

“Hundreds of men have applied for transfers to women’s prisons, and dozens have already been transferred. These transfers have resulted in intimidation, sexual harassment, physical assaults, and sexual assaults committed by the men against female inmates. This policy has also prevented women whose religions require sex separation from practicing their faith,” the Women’s Liberation Front website states. “Moreover, sharing intimate space with male offenders has exacerbated women’s symptoms of depression, anxiety, and PTSD; diminished their quality of life due to increased security measures for male offenders; and reduced their access to appropriate trauma-informed care and rehabilitative programs.” 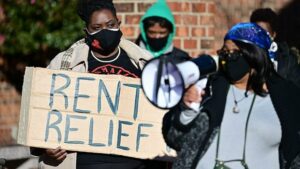