The labor shortage and supply chain chaos under President Biden are making costs higher for businesses, who pass on the high prices to consumers.

Under President Joe Biden, the US inflation rate has jumped to its highest level in nearly 40 years, continuing to add pressure on consumers nationwide.

According to the Labor Department report released on Wednesday, the consumer price index rose 0.5 percent last month after surging 0.8 percent in November.

In December, the annual inflation rose to seven percent, the highest increase since June 1982. It follows the November 6.8 percent annual rate increase.

The nation’s labor shortage is inflating wages, causing costs to increase for businesses. The added chaos in the supply chain is not showing any signs of resolve as the Omicron surge sidelines workers by the millions.

The wage increases and supply chain struggles suggest that increased inflation could persist well into 2022.

The continued increase in prices has wiped out the recent pay increases that many Americans have received. The inflation rate makes it more difficult for households, especially lower-income families, to afford basic essentials.

Recent polls have shown that inflation is displacing the coronavirus pandemic as a top public concern.

The polls also make it clear that this is a political threat to Biden and the Democrats, whose House and Senate majorities hang in the balance in November’s election.

On Wednesday, the White House attempted to temper expectations ahead of the inflation report. For months, Biden has been calling the Nation’s inflation transitory and a temporary issue for the nation.

“It’s highly unlikely that it’s going to be long-term inflation that’s going to get out of hand,” Biden said last July.

After the most recent inflation report, Biden admitted that rising prices were a “bump in the road.” He insisted that consumer prices would level off and the economy would return to normal.

McCarthy included an animated graphic showing Biden’s face tracking the annual inflation rate from the beginning of his administration.

This trend isn’t “transitory,” and it’s all happening under Democrats’ one-party control. pic.twitter.com/GfEhPQ67xy 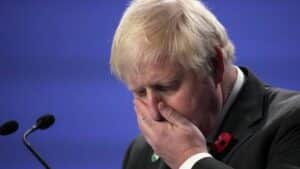