If Biden Loses Congress in Midterms, Hillary Clinton May Run in 2024

According to a former advisor to Bill Clinton, Hilary would be the ideal change candidate for Democrats in light of Biden's failures

A former advisor to Bill Clinton says there’s a “good chance” Hillary Clinton will run against Donald Trump in the 2024 presidential election.

In a radio interview on Sunday, Dick Morris claimed that a Clinton versus Trump rematch is likely if the Democrats fail to maintain majority control in the government. Morris went on to allege that failure in November’s midterms would cause democrats to turn on President Joe Biden and Vice President Kamala Harris.

“There’s a good chance of it, especially if the current President loses Congress in the midterms,” Morris told WABC radio host John Catsimatidis.

Morris applauded Clinton’s campaign strategy, which could see her compete against Trump again after he beat her to the White House in 2016.

“Hillary has set up a brilliant, brilliant strategy that nobody else is able to do,” Morris said.

“What she’s done — at a point at which no Democrat is willing to come out and criticize Joe Biden, but all Democrats are disappointed with him and have to realize the ultimate correctness of our accusations that he was incompetent to be president — she has set up a zero-sum gain with him.”

“The worse he does, the better she does because she’s positioned herself as the Democratic alternative to Biden,” concluded Morris.

In the interview, he also pointed out that it appears Clinton has positioned herself as an alternative to the extreme left views. She has previously cautioned Democrats to be mindful of candidates they’re running in what she refers to as “purple districts.”

Morris also said that ‘”there is only one person capable of that level of thinking… her husband, Bill.”

So far, Clinton has not said if she intends to campaign for president in 2024. However, she has publicly stated that Biden’s efforts “mean nothing if we don’t have a Congress that will get things done and we don’t have a White House that we can count on to be sane and sober and stable and productive.”

Morris claims that Clinton could easily take her place as the Democratic Party’s “change candidate” who can contrast Biden’s failures in office.

Morris went on to state that the “left-wing took over the party and led us into disaster in the 2022 midterms.” 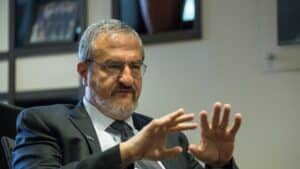 8 responses to “If Biden Loses Congress in Midterms, Hillary Clinton May Run in 2024”