The U.S. House of Representatives voted to allow for Congressional staff members to form a union to address their concerns regarding compensation.

The motion was supported by the Congressional Workers Union, which says staffers’ salaries do not meet the high cost of living in Washington DC.

The union announced in February that a Congressional Progressive Staff Association survey found 91% of staff wanted “more protections to give them a voice at work.”

“While not all offices and committees face the same working condition, we strongly believe that to better serve our constituents will require meaningful changes to improve retention, equity, diversity, and inclusion on Capitol Hill,” the union said on Twitter. “That starts with having a voice in the workplace. We call on all congressional staff to join in the effort to unionize, and look forward to meeting management at the table.”

Michigan Representative Andy Levin introduced the measure that amends the Congressional Accountability Act of 1995 to allow for unionization.

A former labor organizer, Levin said the staffers involved in the push for a union would decide how the collective bargaining was conducted.

“It’s their organizing campaign. It’s not about us,” he said in February. “I’m just here to shepherd the legislation that gives them their legal rights that they should have had a long time ago.”

Levine said improving working conditions for aides could decrease staffing turnover rates, increase the House’s effectiveness, and allow people who would not be able to afford the capital’s cost of living to take jobs with Congress.

“You don’t want only children of the privileged to be able to work here because somehow their family can support them,” Levin said, per The Hill.

More than 130 congressional Democrats supported the new rule, including all of the Michigan delegation, noted The Detroit News.

Not all leading Democrats have backed the measure, however. West Virginia Senator Joe Manchin said he would have to contemplate the nuanced effect of the possible union earlier this year.

“I’ve always been a big supporter of the unions, having a right to unionize. … I’m here at the will and pleasure of the people. They have a chance to change and things of that sort,” Manchin said to The Hill. “So we got to make sure we’re doing it and doing it right. My greatest thing is to have the best staff I possibly can to serve the people of West Virginia.”

During a March hearing of the Committee on House Administration, Davis said he supports unions but that one for aides could be “impractical” and increase “dysfunction in Washington.”

“This is a concept that could create numerous conflicts of interest and impact members’ constitutional responsibilities to the American people without the guarantee that any improvement for staff wellbeing would actually materialize,” Davis said.

“It’s like there are 535 employers,” said Blunt, who serves on the Senate Rules Committee. “I don’t know quite how that fits into any traditional union structure unless you have multiple unions.”

“Tonight is a reminder of the power of collective action and what the freedom to form a union truly means — democracy not just in our elections, but in our workplaces too,” the CWU said in a statement on May 10.

The union asked congressional workers to participate in two rallies – one on May 11 and one on May 13 – to “celebrate the passage of resolutions and Mark the next phase of [its] union drive.”

The measure went into immediate effect after the House’s 217-208 vote as no action is needed from the Senate.

Speaker of the House Nancy Pelosi said she would give her “full support” to Congressional staff seeking to unionize.

“Like all Americans, our tireless Congressional staff have the right to organize their workplace and join together in a union,” said Pelosi’s Cheif of Staff Drew Hammil.

Pelosi also signaled her interest in aides working conditions in recent weeks by setting the minimum annual pay at $45,000. 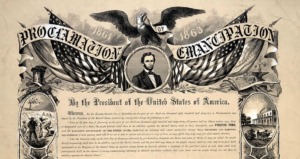 OPINION: The Undoing of Slavery in America — A Timeline