Similar legislation was introduced in the Senate last week

Republicans in the House of Representatives have moved to defund the Department of Homeland Security’s organization established to regulate online information deemed to be false.

“The President’s Ministry of Truth is just an un-American abuse of power, which is a scheme conjured up by Washington Democrats to grant themselves the authority to control free speech,” said the California representative during a May 11 press conference, alluding to George Orwell’s dystopian novel 1984.

Secretary Alejandro Mayorkas revealed the DHS’s new board in late April while appearing before the House Appropriations Subcommittee on Homeland Security, which faces immediate resistance from conservatives across the country.

Florida Governor Ron DeSantis said the board violated the founding principle of the United States and vowed to “fight back.”

“Clearly, our entire principles that the country was founded on you cannot have a Ministry of Truth in this country,” DeSantis said during a press conference on April 29. “So let’s get real here, let’s make sure we’re doing things to benefit Floridians and Americans but we’re not going to let Biden get away with this one.”

“Last week, 170 House Republicans signed a letter to Homeland Security Secretary Alejandro Mayorkas seeking answers about the disinformation governance board,” notes The Hill. “The House Judiciary Committee GOP also invited Nina Jankowicz, head of the board, to speak to the committee.”

Similar steps to defund the disinformation board were introduced in the Senate by Arkansas’ Tom Cotton. Cotton introduced legislation that would “prohibit the use of federal funds for the Disinformation Governance Board of the Department of Homeland Security” and bars the Biden administration from using taxpayer money to create to aid the board’s activities.

Senators Ted Cruz, Marsha Blackburn, Jim Risch, Marco Rubio and Rick Scott have all signed on to co-sponsor the bill. 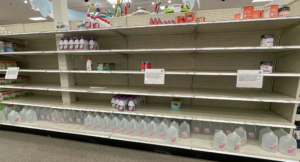 Baby Formula Shortage Persists, FDA Says 'We Are Doing Everything in Our Power'