Lawmakers asked the company to monitor and 'consider suspending dangerous, unfounded posts' on a year-round basis

With Republicans, who will hold a majority in the House in January, promising fresh investigations of social media censorship, Democrats are urging Meta to “recommit” to censoring disfavored content about election integrity on a year-round basis.

“After each election cycle, social media platforms like Meta often alter or rollback certain misinformation policies, because they are temporary and specific to the election season,” the letter states. “Doing so in this current environment, in which election disinformation continuously erodes trust in the integrity of the voting process, would be a tragic mistake. Meta must commit to strong election misinformation policies year-round, as we are still witnessing falsehoods about voting and the prior elections spreading on your platform.”

The lawmakers also petitioned the platform to censor “high-profile individuals” who have called into question the outcomes of U.S. elections.

“Unlike other major social media platforms, Meta’s policies do not prohibit posts that make unsubstantiated claims about voter fraud,” the lawmakers wrote. “A review by the Washington Post found 18 candidates denying the 2020 election results and 17 candidates claiming the 2022 elections will be rigged or corrupt posted on Facebook, with none of these posts on Facebook being labeled or challenged. This is highly troubling, and an area where Meta must improve its oversight and enforcement.”

The letter comes as multiple journalists are exposing Twitter for censoring users at the behest of the U.S. government, reigniting debate over what sorts of government interventions in matters of content removal, bans, and shadow bans constitute First Amendment violations.

Earlier in the month, Republicans indicated they would be investigating Twitter’s formal head of legal, policy, and trust, Vijaya Gadde, for her role the company’s censorship. 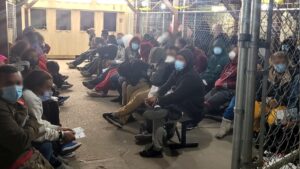