Pelosi: 'Democrats will never relent in our fight to defend freedom for women'

In the wake of the recent United States Supreme Court decision overturning Roe v. Wade, House Democrats will be voting next week on two separate bills to try and federalize abortion.

The vote will come just days after President Joe Biden signed an executive order tapping multiple federal agencies to adopt plans to protect and expand access to abortion pills and contraceptives in states that will not enact legislation curbing their use.

One bill will codify abortion rights into federal law and expand the protections in Roe v. Wade. The other will protect women who want to travel to blue states to undergo abortion procedures.

While Republicans seek to criminalize reproductive health care nationwide, @HouseDemocrats will never relent in our fight to defend freedom for women and for every American. Read my full statement here: https://t.co/HaVrK9DPf2

She also called attempts by Republicans to limit interstate travel for the purpose of obtaining an abortion “disturbing” in her statement.

“We have a sacred, fundamental duty to expand freedom in America, not to roll back fundamental rights,” she said. “While Republicans seek to criminalize reproductive health care nationwide, House Democrats will never relent in our fight to defend freedom for women and for every American.”

Both bills are expected to breeze through the House, where Democrats hold a strong majority. However, in the Senate, the legislation does not have enough to overcome the filibuster threshold of 60 votes.

Some Senators have indicated they would be on board with scrapping the filibuster rule to pass both pieces of legislation with a simple majority of 51 votes.

But, Senators Joe Manchin of West Virginia and Kyrsten Sinema of Arizona oppose ending the filibuster, leaving both bills dead-on-arrival in the Senate. 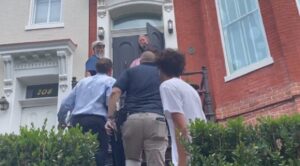 Home of Steve Bannon Swatted, Caller Claimed They Were Inside and Had Shot Someone