Homeland Security Secretary Alejandro Mayorkas believes he could do a “better job explaining” the Disinformation Governance Board to the American public.

The creation of the Board following Elon Musk’s successful bid to purchase Twitter caused many to question the motivation and timing behind the panel.

“The goal is to bring the resources of [DHS] together to address this threat,” Mayorkas told Congress during testimony on Capitol Hill.

“Disinformation from Russia, from China, from Iran, from the cartels,” he said.

He later clarified his comments on Fox News.

“This is a working group that takes best practices to make sure that, in addressing disinformation that presents a threat to the homeland, our work does not infringe on free speech, does not infringe on civil rights, civil liberties,” he explained. “It’s not about speech, it’s about the connectivity to violence. That is what we need to address. You know, an individual has the free speech right to spew anti-Semitic rhetoric. What they don’t have the right to do is take hostages in a synagogue, and that’s where we get involved.”

Mayorkas went on to defend the “objectivity” in the person charged with leading the board, Nina Jankowicz.

“I don’t question her objectivity,” Mayorkas said Sunday. “There are people in the department who have a diverse range of views, and they’re incredibly dedicated to the mission. We’re not the opinion police. She has testified before Congress a number of times, she’s recognized as a tremendous authority, and we’re very fortunate to have her.” 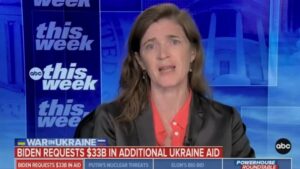