A private, Christian college will open 50 charter schools in Tennesee and teach a civics education curriculum that explores Western tradition and America’s strengths

Hillsdale College, a Michigan-based school with 1,500 students, was offered $32 million in public funding for the project by Governor Bill Lee.

Lee announced his plans to partner with the college during his State of the State Address in January 2022.

“For decades, Hillsdale College has been the standard-bearer in quality curriculum and in the responsibility of preserving American liberty,” Lee said during his address. “I believe their efforts are a good fit for Tennessee.”

“Informed patriotism should stretch beyond the K-12 classroom and into higher education. In many states, colleges and universities have become centers of anti-American thought, leaving our students not only ill-equipped but confused,” the governor added. “But, in Tennessee, there’s no reason why our institutions of higher learning can’t be an exceptional part of America at Its Best.”

Lee noted that Tennessee had 116 charter schools run by 22 operators at the time. The schools supported 44,000 students in total and 91% of those enrolled were minorities.

The new charter schools will use Hillsdale’s 1776 curriculum, a civic curriculum that focuses on the development of the nation under the tagline “America is an exceptionally good nation.”

“Our nation has grown from a few people huddled in a strange land along the eastern seaboard to a huge nation that spans the continent,” wrote Larry P. Arnn, the President of Hillsdale College, in an open letter discussing the program. “Through the vast changes that have come upon the world and the United States in these centuries, the nation has been governed under a written Constitution, long the oldest surviving in human history. Under the principles of the Declaration of Independence, that Constitution provides for a government operating under the authority of the governed. This achievement is unprecedented.”

The 2,400-page curriculum has been largely described as the foil to The New York Times’s 1619 project curriculum that centers on Critical Race Theory.

Critics of the 1776 curriculum have denounced the program for “glossing over some parts of American history while putting an ideological spin on some topics such as affirmative action” notes Newsmax.

“This new ‘student based’ funding formula scheme is just a new way for Governor Lee to steer public dollars to private companies, and he’s using these charter schools as a vessel to do it, and our traditional public schools will suffer,” wrote Justin Kanew in an opinion piece for the Tennessean.

“The partnership we are going to have with them developing a civics curriculum from an entity that holds a conservative view, you couldn’t go to a better resource and I am excited for that partnership,” Bell told The Advocate & Democrat on April 5.

There are currently 24 schools operating in 13 states as part of the Hillsdale charter school network. 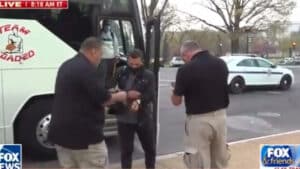