Hillary Clinton Implies She Might Sue Fox News For Defamation, Hannity Tells Her to 'Bring It On'

The report stated, “Lawyers for the Clinton campaign paid a technology company to ‘infiltrate’ servers belonging to Trump Tower, and later the White House, in order to establish an ‘inference’ and ‘narrative’ to bring to government agencies linking Donald Trump to Russia, a filing from Special Counsel John Durham found.”

Responding to the story during the convention, Clinton said that Fox News is “getting awfully close to actual malice in their attacks.”

“Actual malice” is the standard required for a public figure to have a successful defamation lawsuit. The plaintiff must prove that a defamatory statement was made “with the knowledge that it was false or with reckless disregard of whether it was false or not.”

Clinton claimed that negative stories are written about her to get people to stop paying attention to any “trouble” Trump gets into.

Hillary Clinton calls out Fox News for propagating conspiracy theories about her as investigations draw closer to Trump:

“They’re getting close to actual malice in their attacks.” pic.twitter.com/b4jDVaQbKX

“By the way, they’ve been coming after me again lately, in case you might have noticed. It’s funny. The more trouble Trump gets into, the wilder the charges and conspiracy theories about me seem to get. So now his accountants have fired him, and investigations drop closer to him, and right on cue, the noise machine gets turned up, doesn’t it?” Clinton asked the crowd.

“Fox leads the charge with accusations against me, counting on their audience to fall for it again. And as an aside, they’re getting awfully close to actual malice in their attacks. But as I said, don’t get distracted. Don’t let the extremes of any or either side throw us off course. Focus on the solutions that matter to voters, not the slogans that only matter on Twitter,” she continued.

Later in the evening, Fox News host Sean Hannity responded to the vague lawsuit threat on his show, telling her to “bring it on.”

“It’s called discovery, and it’s called depositions,” Hannity said. “Bring it on. Malice? Really? It’s called news. Hillary, we invite you to bring it on. It’s from a legal filing we quoted exactly from the filing that was put in federal court.” 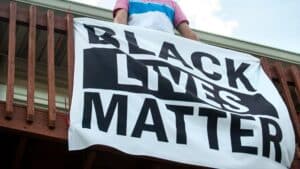