A judge declined to toss a trademark lawsuit from Hermès International brought against a non-fungible token (NFT) artist selling “MetaBirkins.”

U.S. District Judge Jed Rakoff rejected a motion to dismiss from NFT artist Mason Rothschild on Friday, writing in his order that he would “issue an opinion in due course setting forth the reasons for this ruling.”

Rothchild has reportedly made over $1 million selling the virtual Birkin Bags, which he unveiled at the Art Basel art festival in December. He did not have approval of the French fashion house to use their brand and they filed a lawsuit against him in January.

The artist’s NFTs are a virtual spin on the iconic bag — but covered in colorful fur as commentary on their use of leather. 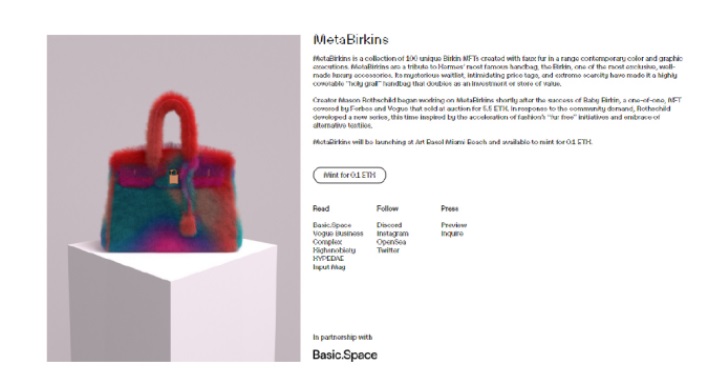 According to a report from Reuters, “the company called Rothschild a ‘digital speculator’ and MetaBirkins a ‘get rich quick’ scheme and said ‘the title of artist’ does not let him use the Birkin trademark to mislead consumers.”

In his 33-page motion to dismiss, the artist’s lawyers claimed that “each of the 100 works in Rothschild’s ‘MetaBirkins’ series is a unique, fanciful interpretation of a Birkin bag. Rothschild’s art is made with pixels, but the bags are depicted as fur covered. This aspect of Rothschild’s art comments on the animal cruelty inherent in Hermès’ manufacture of its ultra-expensive leather handbags. These images, and the NFTs that authenticate them, are not handbags; they carry nothing but meaning.”

The legal team cited Rogers v. Grimaldi and argued that “Rothschild has the right to make and sell art that depicts branded products, and he has the right to identify his depictions of Birkin bags as ‘MetaBirkins’—a name that both refers to the context in which he makes the art available (i.e., the online, virtual environment popularly dubbed the ‘Metaverse’) and alludes to his artwork’s ‘meta’ commentary on the Birkin bag and the fashion industry more generally.”

Rothchild’s team argued that art does not lose First Amendment protection just because it is sold. They also argued that Andy Warhol “depicted iconic brands, including Campbell’s Soup and Coca-Cola, in stylized but plainly recognizable form” and that “well-known brands have long been the subject of such artistic reflection and commentary.”

The price of an actual physical Birkin Bag can range from thousands of dollars to over one hundred thousand dollars.

Rothchild’s first NFT using Birkin imagery was of a transparent bag with a 40-week fetus gestating inside of it. According to the motion, the digital art initially sold for $23,500 and then resold for $47,000.

Merriam-Webster defines an NFT as “a unique digital identifier that cannot be copied, substituted, or subdivided, that is recorded in a blockchain, and that is used to certify authenticity and ownership (as of a specific digital asset and specific rights relating to it),” and also as “the asset that is represented by a non-fungible token.”

The lawsuit is widely being watched as a landmark case on how trademark law will apply in the NFT space. 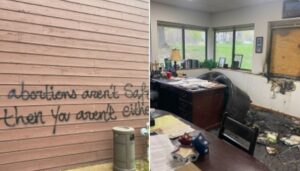