McCarthy have vowed to remove Representatives Adam Schiff, Eric Swalwell, and Ilhan Omar from their committees

The House Minority Leader has suggested not appointing Democratic Congressmen Adam Schiff and Eric Swalwell to the House Intelligence Committee would be proof of bias among the Republican Party.

New York Congressman Hakeem Jeffries nominated the two California congressmen in a letter to Speaker of the House Kevin McCarthy.

“It is my understanding that you intend to break with the longstanding House tradition of deference to the minority party Intelligence Committee recommendations and deny seats to Ranking Member Schiff and Representative Swalwell,” Jefferies wrote. “The denial of seats to duly elected Members of the House Democratic Caucus runs counter to the serious and sober mission of the Intelligence Committee.”

Jefferies said that denying the committee appointments to Schiff and Swalwell but permitting New York Congressman George Santos — who the Minority Leader described as a “serial fraudster”— would prove an “apparent double standard” that “risks undermining the spirit of bipartisan cooperation that is so desperately needed in Congress.”

“I urge you to honor past practice of the House of Representatives and our mutual interest in working together for the good of the American people by accepting my recommendation of Adam Schiff to serve as Ranking Member and Eric Swalwell to continue his service as a Member of the Intelligence Committee,” Jefferies concluded.

In addition to keeping Schiff and Swalwell off the House Intelligence Committee, McCarthy promised to remove Minnesota Congresswoman Ilhan Omar from the House Committee on Foreign Affairs.

“McCarthy has long pledged to oust the three, citing objections to their behavior and the precedent of the previous House removing committee assignments for Republican Reps. Marjorie Taylor Greene of Georgia and Paul Gosar of Arizona,” per ABC News.

Greene was removed from the House’s Committee on Education and Committee on Budget in February of 2021 because of controversial post statements on social media. Gosar was removed from the Natural Resources and Oversight Committees in November of 2021 for “tweeting a video depicting himself as an anime character assassinating progressive New York Rep. Alexandria Ocasio-Cortez and attacking President Biden,” reports The New York Post.

Jefferies does not name Greene or Gosar in his letter to McCarthy. Instead, the congressman opted to obliquely reference the removals, which he says do “not serve as precedent or justification” of Schiff or Swalwell because they have “never exhibited violent thoughts or behavior.”

“In the 117th Congress, two Members were removed from their committee assignments after a bipartisan vote of the House found them unfit to serve on standing committees for directly inciting violence against their colleagues,” Jefferies wrote. “This action was taken by both Democrats and Republicans given the seriousness of the conduct involved, particularly in the aftermath of a violent insurrection and attack on the Capitol.”

“Kevin McCarthy seems to want to heat up the leftovers of a story that goes back to Barack Obama’s first term. The FBI has said three different times in a rare form that they never talked about the investigations,” he said, per the Washington Times. “All I did was help them. I was never suspected of wrongdoing.” 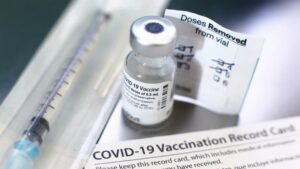