‘Texas should not have to bear the burden of the Biden Administration’s failure to secure our border,’ Abbott said

Texas Governor Greg Abbott has continued to send buses of migrants to the nation’s capital in response to the Biden administration’s border policies.

The ninth and tenth buses arrived in Washington D.C. from Texas in the evening on April 21.

“It’s an atrocity that we have a President of the United States that is not securing the border. He is violating laws passed by Congress to secure the border and on top of that, we have a president who is turning a blind eye to security-based issues by allowing people on terrorist watch lists to come into the United States of America,” Abbott said during an interview with Sean Hannity this week.

Abbott also told the television host that he was considering sending the migrants to Delaware, President Joe Biden’s home state.

Abbott has said he was forced to take action after the Biden administration announced it would end Title 42. The governor has been an open critic of how the federal government has handled the immigration crisis at the Southern Border throughout Biden’s time in office.

Under Abbott’s direction, the Texas Division of Emergency Management has been transporting migrants, who have been released from federal custody, to Washington D.C. rather than letting them go inside of Texas.

“Many of the migrants had been released into small Texas communities that Abbott said were overwhelmed,” per Fox News.

All migrants on board the buses voluntarily agreed to the trip. As of April 20, reports indicate 152 migrants had been transported to the capital.

Florida Governor Ron DeSantis has said in recent weeks that he would take similar action and fly illegal migrants arriving in his state to Delaware.

“If Biden is dumping people, which he has dumped people, they fly them in at two in the morning,” DeSantis said during a press conference on April 6. “They haven’t done it lately, but they did it many months ago. We now have money where we can reroute them to sanctuary states like Delaware — and we’re gonna do that — to make sure we’re keeping people safe here.” 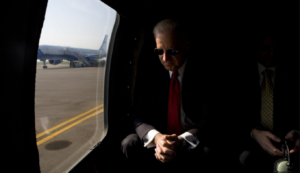