Refusal to sign bill was based on potential for 'unintended consequences'

Governor Gavin Newsom has vetoed a piece of legislation that would have legalized supervised drug consumption sites.

Senate Bill 57 would have authorized governments in San Francisco, Oakland, and Los Angeles to create sites where drug users would be able to use with clean supplies.

SB57 would also have required public comment prior to a jurisdiction enacting an overdose prevention program, and committed local jurisdictions that chose to participate to conduct peer-reviewed studies on the efficacy and community impact of the programs.

“I have long supported the cutting edge of harm reduction strategies,” Newsom said in a letter to state lawmakers. “However, I am acutely concerned about the operations of safe injection sites without strong, engaged local leadership and well-documented, vetted, and thoughtful operational and sustainability plans.”

Newsom said that the number of injection sites that the bill would authorize could exist “well into the later part of this decade” and could come with unintended consequences.

“It is possible that these sites would help improve the safety and health of our urban areas, but if done without a strong plan, they could work against this purpose,” he wrote. “These unintended consequences in cities like Los Angeles, San Francisco, and Oakland cannot be taken lightly. Worsening drug consumption challenges in these areas is not a risk we can take.”

The decision to veto SB57 is being seen by political insiders as a political move by Newsom, who has previously said he was “very, very open” to the program. Newsom, who has recently been spotted at the White House, and who is running ads targeting potential Republican front-runner Ron DeSantis in Florida, is thought to be gearing up for a 2024 presidential run. Signing the legislation could potentially make him an easy target for political opponents.

“He likes to be ahead of the curve,” said Jessica Levinson, a political analyst who teaches at Loyola Law School in Los Angeles, according to The New York Times. “But if he signs this, the ads kind of write themselves: He becomes ‘Governor Heroin.’”

“Today’s veto is tragic. For eight years, a broad coalition has worked to pass this life-saving legislation,” California State Sen. Scott Wiener said in a statement. “While this is a major setback for the effort to save lives and connect people to treatment, we must not — and will not — let it end this movement.” 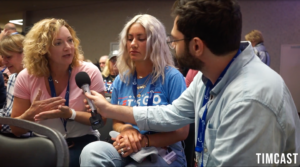