Former Speaker of the House Newt Gingrich commented on Republican infighting during a contentious speaker vote, suggesting it was “healthy.”

“I don’t think that Kevin would do that. McCarthy is a very solid conservative,” Gingrich said. “There is no common ground. If you give the Democrats any sense of control, they’re gonna demand veto over the investigations. They’re going to demand veto over the committee structures. It’s not possible.”

“The last time this happened in 1923, it took nine ballots and the following election the Republicans picked up 22 more seats,” Gingrich said after previously predicting a Speaker would be chosen by Thursday. “So people shouldn’t assume this is the end of the Republican Party in any way. This is a healthy, tough, serious conversation.”

You can’t have 10% of the conference dictate to 90% of the conference. Lincoln warned in his first inaugural in 1861, the problem with secession as a principle is once you get to secede, so does everybody else get to secede. Well, that’s the problem that these guys have now created. They basically said any five Republicans can decide to blackmail the conference and I think that’s going to be totally unacceptable as a way of going forward and it would make the House ungovernable and would betray the trust of the American people. Remember, we got almost 3 million more votes than the Democrats did for the House and those folks voted for us to have some kind of effective system, not to spend all of the next two years in chaos.

Ingraham further inquired about President Joe Biden’s comment regarding contention between Republicans, referring to them as a “Congress that can’t function.”

“I think the idea that Joe Biden, who has been lying consistently about his son, who’s gotten rich by means I think are probably illegal, who has never been to the border … you look at his policies, you look at his weakness around the world, I don’t think we need to be lectured by Joe Biden,” Gingrich replied.

“This is a healthy, free Republican Party,” Gingrich continued. “We’re not the Nancy Pelosi machine. We don’t have the culture of the Democrats. We’re not a collection of mascots led around by the nose and … that’s part of the nature of being Republican.” 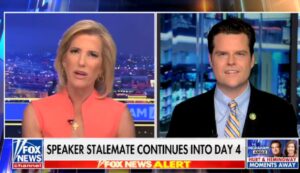 WATCH: Rep. Gaetz Says He Will Resign From Congress if Democrats Join Up to Elect a Moderate Republican Speaker