Gay dating app Grindr has been removed from the Apple Store in China.

The app was reportedly removed due to difficulty complying with China’s Personal Information Protection Law.

“The new regulations a local version of Europe’s General Data Protection Regulation, or GDPR — went into effect at the end of 2021. The law limits personal information stored in apps and requires data transferred between China and other regions to be approved by the Chinese government,” Bloomberg News reports. “A representative for Grindr noted that other companies have removed their apps for similar reasons.”

The report continued on to say that “the move, which occurred on Jan. 27, came days after Beijing vowed to renew its campaign to police online content — sparking concern that Grindr had been targeted. The service also disappeared from app markets run by domestic giants like Tencent Holdings Ltd. and Huawei Technologies Co. Alphabet Inc.’s Play Store, like other Google services, is unavailable in China. Local Grindr competitors, including Blued, remain accessible across iPhones and Android devices.”

Last week, the Cyberspace Administration of China announced new efforts to regulate online content ahead of the Olympics. The administration said that they will be targeting online rumors, child pornography, and “ill-natured” activities such as “feudal superstition.”

China has also been cracking down on “sissy idols” and “effeminate men” by banning them from appearing on television.

In September, it was reported that China’s National Radio and Television Administration had an eight-point plan for “further regulation of arts and entertainment shows and related personnel.”

The National Radio and TV Administration said that broadcasters must “resolutely put an end to sissy men and other abnormal esthetics,” and used a slang term for effeminate men — “niang pao,” which translates to “girlie guns.”

ABC News reported at the time that the administration said broadcasters should avoid promoting “vulgar internet celebrities” and admiration of wealth and celebrity and television networks should, instead, “vigorously promote excellent Chinese traditional culture, revolutionary culture and advanced socialist culture.”

The Chinese Communist Party said that the entertainment industry has been “severely polluting the social atmosphere.” 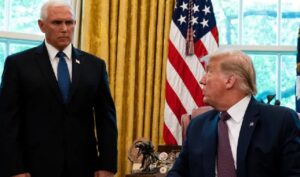