As of Monday, gas prices spiked to more than $4 a gallon as energy markets are deeply impacted by Russia’s war in Ukraine, a reality that may become worse if Congress adopts bipartisan actions to ban Russian oil.

The most recent surge in gas prices appears to be impacted directly by Russia’s invasion of Ukraine and the international sanctions imposed on Moscow in response.

There has been unified bipartisan support of eliminating Russian oil imports and expanding sanctions on the nation.

It remains to be seen just how much patience American consumers will show for higher prices at the pump.

Gas prices were already high before the war in Ukraine and were causing political problems for President Biden and the White House. Inflation has impacted almost every sector of American life.

It appears that Biden will continue to experience souring public opinions from the historically high gas prices.

“The short answer is that the higher gas prices go and the longer they continue to be such, that will hurt the president and Democrats over time,” said Ivan Zapien, a lobbyist, and former Democratic National Committee official.

The White House has said that it will do everything possible to mitigate pain for U.S. consumers. However, Biden has repeatedly acknowledged that there will be costs for the U.S. economy and American households due to the war in Ukraine.

A ban on Russian oil imports would rock markets further, yet there are many legislative calls to take that step.

White House Press Secretary Jen Psaki said the White House was discussing the matter internally, but no decision had been made.

In a press conference on Monday, Psaki pushed back at GOP suggestions that the administration is limiting oil supplies in the U.S.

Psaki stated that the U.S. has over 9,000 unused oil and gas leases, although using those leases would not instantly produce the needed oil. American oil rigs have more than doubled since July 2020, from 172 to 519 as of last week. However, that number remains significantly below the 800 rigs recorded in 2019. 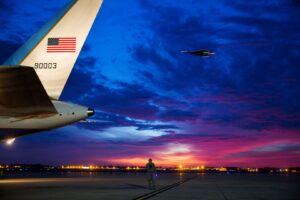