Formula One (F1) drivers will now have to get permission from the International Automobile Federation (FIA) before they can make any political or religious statements publicly.

The new rule will go into effect for the 2023 season.

An update to the International Sporting Code issued by the FIA on Wednesday bars “the general making and display of political, religious and personal statements or comments notably in violation of the general principle of neutrality promoted by the FIA under its Statutes.”

An FIA spokesman told The Guardian that the update was “in alignment with the political neutrality of sport” as enshrined in the International Olympic Committee code of ethics.

Hamilton wore a T-shirt to the 2020 Tuscan Grand Prix that said “Arrest the cops who killed Breonna Taylor” on the front, along with the slogan “Say Her Name.”

Lewis Hamilton wearing a Breonna Taylor T-shirt at the start of the F1 in Italy. #BLM pic.twitter.com/XSmetU9kgZ

The driver also made the Black Lives Matter logo his profile photo.

Lewis Hamilton, F1’s only Black driver, shared his emotions following a Kentucky grand jury’s decision not to prosecute any of the officers involved in the death of Breonna Taylor. pic.twitter.com/UhFb3V5uvm

“Hamilton has also called for more change in Saudi Arabia, saying this year that he was shocked to hear of mass executions, and has raced in the Middle East with a rainbow helmet in support of LGBTQ+ rights,” according to the Guardian report.

Vettel has been outspoken about LGBT issues and climate change. He wore shirts to this year’s Canadian Grand Prix with slogans including “Stop Mining Tar Sands” and “Canada’s Climate Crime.”

Last year, Vettel wore a rainbow shirt to Hungary with a message that said “same love” in protest of the nation’s laws.

Sebastian Vettel, on receiving a reprimand at the Hungarian #F1 Grand Prix, having worn a rainbow t-shirt saying ‘Same Love’:

“I’m happy…they can disqualify me. They can do whatever they want to me, I don’t care. I would do it again.”

The Hill reports that “F1 also launched an anti-racism initiative at that time to encourage more diversity in the series, with F1 CEO Chase Carey saying in a statement at the time that “as a global sport we must represent the diversity and social concerns of our fans, but we also need to listen more and understand what needs to be done and get on with delivering.”” 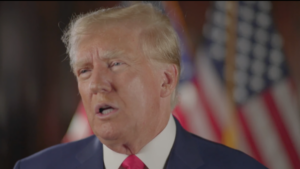 'Our Country Is Under Invasion': Trump Releases 2024 Immigration Policy