The 97-year old, former president, addressed an impending collapse of democracy that has resulted from a divide in the nation's leadership

On Wednesday, former President Jimmy Carter cautioned that democracy is being jeopardized in the US, saying that “our great nation now teeters on the brink of a widening abyss.”

A New York Times op-ed published on the day before the anniversary of the January 6 insurrection, Carter issued a direct warning about the state of democracy in the divided nation.

He said, “without immediate action, we are at genuine risk of civil conflict and losing our precious democracy. Americans must set aside differences and work together before it is too late.”

Last January, Carter joined the three other living former Presidents, Barack Obama, George W. Bush, and Bill Clinton, in decrying the protestors who breached the Capitol. The violent protest occurred as Congress held a session to certify the results of the 2020 presidential election.

Carter said that he hoped the violent protest “would shock the nation into addressing the toxic polarization that threatens our democracy.”

He went on to say that “politicians have leveraged the distrust they have created to enact laws that empower partisan legislatures to intervene in election processes.”

He continued his critique of lawmakers, saying, “they seek to win by any means, and many Americans are being persuaded to think and act likewise, threatening to collapse the foundations of our security and democracy with breathtaking speed.”

“I now fear that what we have fought so hard to achieve globally has become dangerously fragile at home,” said Carter.

After his presidency, he created the Carter Center, a non-profit which monitors free elections worldwide.

In his Op-Ed, Carter offered five points to secure elections in the United States:

“For American democracy to endure, we must demand that our leaders and candidates uphold the ideals of freedom and adhere to high standards of conduct,” he concluded. 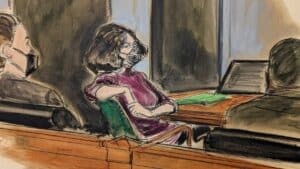 Ghislaine Maxwell Lawyers Move for a Mistrial After Comments from Jurors