John R. Allen, a retired marine corps four-star general who previously led U.S. forces in Afghanistan and has ties to former Secretary John Forbes Kerry is under investigation for illegally lobbying on behalf of Qatar, according to court documents.

He is being investigated for violations of the “Foreign Agents Registration Act, restrictions on former officers of the Executive Branch, obstruction of justice, aiding and abetting, and conspiracy.”

Allen has been suspended in his role as president of the prestigious Brookings Institution pending the outcome of the investigation.

The general is just the latest to become entangled in a plot to influence the foreign policy of the United States in relation to a host of Middle East countries.

In an affidavit attached to the application for a search warrant submitted to the United States District Court for the Central District of California, FBI Special Agent Babal Adib details the probable cause to suspect Allen of his involvement in the conspiracy as well as the steps he took to cover his trail.

In order to “establish a criminal violation” of the Foreign Agents Registration Act the government must prove that Allen acted in the United States as an agent of a foreign principal, that he failed to register his status as their agent with the attorney general, and that his violation of the act was done knowingly and willfully.

That plot, which was spearheaded by Imaad Zuberi, a Pakistani-American entrepreneur who has already pled guilty to other charges and is serving a 12-year sentence, ensnared both political parties.

Zuberi was a top political bundler for both former President Barack Obama and former Secretary of State Hillary Clinton.

With the help of Richard Olson, the former U.S. Ambassador to the United Arab Emirates and U.S. Ambassador to Pakistan, Zuberi convinced Allen to coordinate in their efforts to sway U.S. officials towards friendlier positions with the Qatari government.

Allen offered to help by finding “mouthpieces” to write op-eds for the Qatari government and to travel to Doha. Granting investigators their first hint that he knew his involvement was not entirely above board, Allen suggested that the trip be classified as a “speaking engagement” despite no intention to give a speech and instead intending to travel and consult directly with the Qatari Emir.

Upon his return, Allen also spoke to H.R. McMaster, relaying to the former National Security Advisor that he had “been close to the Qataris for a long time” and had the trust of their “key leaders.”

“At the same time he was lobbying US government officials on behalf of Qatar, Allen pursued at least one multi-million-dollar business deal with the Qatari government on behalf of a company on whose board of directors he served.”

When the parties became aware they were under investigation, Olson said, they deleted emails concerning the conspiracy and began to coordinate an alternate story to explain their actions. Olson secured a limited immunity deal and revealed this information to the FBI before they conducted their interview with Allen.

Allen read from the script that the three had prepared, contradicting the disclosures Olson made to the FBI behind closed doors and deleted all references to compensation from his personal email accounts that the FBI had already obtained from other sources.

The warrant, which was served to Apple, demanded any copies of those communications from their cloud backup service. 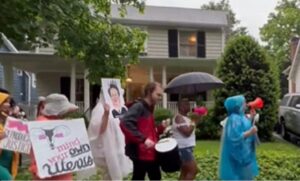