A Florida man has been arrested for attempting to rob a Miami Publix grocery store with a stapler.

During the attempted robbery, the suspect Patrick Abbott, 31, allegedly handed an employee with a note claiming that he had a gun.

Abbott was already out on bond for allegedly abusing a baby. He is accused of repeatedly dropping a four-month-old girl in a Walmart parking lot last month.

The incident at Publix began when an Abbott approached an employee and instructed them to put the money from the register into a bag. According to a report from Local 10, the note read, “read carefully. I have a gun with me and put the money in the bag.”

The quick-thinking staff member pretended to assist a coworker but called for help instead.

Abbott left Publix after his robbery attempt failed and was arrested when police found him throwing away the note on the 100 block of Northeast 50th Street.  The suspect was positively identified by the store employee and taken into custody.

A police search located the item Abbott had claimed was a gun, but it turned out to be a black stapler.

The suspect’s previous arrest occurred when witnesses saw him drop the four-month-old baby girl to the ground in a Walmart parking lot. The incident was reported to an off-duty Miami-Dade police officer working at the store.

When the officer went to approach Abbott, he witnessed him drop the baby again.

Abbott “then walked away from the victim only to then return to the victim and pick her up as bystanders began to scream and run to (her),” police wrote, according to a previous Local 10 report.

“I’ve experienced a lot of things in my life, and that was the worst thing,” Ferguson said.

Abbott was detained and taken into custody, and the child was transported to the hospital.

It is unclear what Abbott’s relation is to the child — if any. 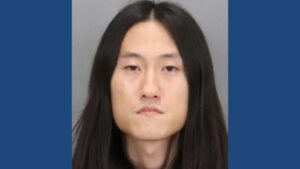