The United States Navy declared a Destroyer out of commission after a Florida judge ruled its unvaccinated commander could not be removed from his post.

The commander has served in the Navy for 18 years and is part of the Destroyer Squadron 26. He commands a destroyer that is based in Norfolk, Virginia.

The officer applied for a religious exemption to the military’s COVID-19 vaccine mandate in September of 2021. After his request was denied in October, he appealed the decision in November.

U.S. District Judge Steven Merryday initially blocked the Navy from removing or demoting the unnamed sailor on Feb. 2. He extended the injunction through a second order on Feb. 18.

On March 3, Merryday denied a request from the Department of Defense to halt the injunction.

The order is part of a lawsuit involving more than 30 unnamed officers from multiple branches of the military who sued the D.O.D. for rejecting the applications for religious exemptions to the vaccine. The destroyer commander joined the lawsuit after reportedly learning that his failure to comply with the vaccine mandate may result in his being relieved from duty.

Merryday “wrote that the stays reflected his view that the Navy is likely unable to prove that it was considering religious exemptions on a case-by-case basis, as required by the Religious Freedom Restoration Act,” reported Military.com.

Military leaders have argued that the commander’s conduct on several occasions has violated the branch’s COVID-19 protocols.

The commodore of Destroyer Squadron 26, Captain Frank Brandon, said he had lost faith in the officer’s leadership because he did not stay home while exhibiting symptoms of the virus. Brandon said that by coming into work, the commander put the crew at risk, according to court documents dated Feb. 9.

Other officials have argued that Merryday’s decision could set a potentially harmful precedent for military operations.

“The court’s order effectively requires the Navy leave a subordinate commander in command of a warship, despite his senior officer’s questions relating to his fitness to discharge his duties as ordered,” stated Vice Admiral Daniel Dwyer, commander of U.S. Second Fleet, in a declaration the government included in its initial motion for a stay of the injunction. “Under no circumstances would the Navy typically deploy a commander in an operational capacity with whom his or her superior officers have such reservations.”

In his latest order, Merryday ordered a hearing take place on March 10 to decide if the Navy can reassign the commander. 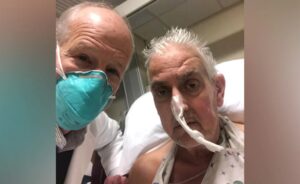