Finland Announces It Will Join NATO

The move would more than double the land of NATO's border with Russia, and provide security for neighboring nations after Ukraine's invasion

Finland’s president and government have announced that the Russian bordered Nordic country intends to apply for membership in NATO, allowing the Western military alliance to expand amid Russia’s war in Ukraine.

On Sunday, the president and prime minister made the announcement at a joint news conference in the Presidential Palace in Helsinki.

President Sauli Niinistö and Prime Minister Sanna Marin said the move must be approved by the country’s Parliament before Finland can formally apply for membership with NATO.

“We hope that the parliament will confirm the decision to apply for NATO membership,” Marin said. The nation’s government is expected to finalize the decision on Monday

Finland’s Parliament is expected to endorse the decision in the coming days, but it is considered a formality. President Niinistö said the decision would be the beginning of a “new era.”

Niinistö added that joining NATO would “maximize” Finland’s security after Russia’s invasion of Ukraine in February.

Finland shares more than 800 miles of border with Russia. Both Finland and Sweden have maintained strict neutrality policies since the end of World War II. Finland has historically viewed NATO membership as an incitement of Moscow, no longer maintaining its neutrality.

According to the Guardian, Niinistö called Putin on Saturday and informed him his country aimed to join NATO in a conversation he described as “direct and straightforward.”

Putin responded to the call by saying Finland’s decision “would be a mistake, since there is no threat to Finland’s security,” according to CBS News.

Sweden is set to decide on its NATO membership Sunday in a governing Social Democratic Party meeting led by Prime Minister Magdalena Andersson.

President Joe Biden held a joint call Friday with both Niinisto and Andersson. According to a White House statement, he “underscored his support for NATO’s Open Door policy and for the right of Finland and Sweden to decide their own future.” 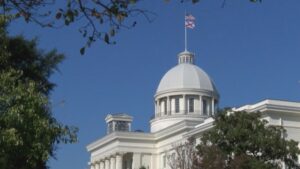