The majority of the 'Big Four' accounting firms globally have decided to cut ties with Russia, impacting thousands of employees

On Monday, Ernst Young (EY) said it would sever its ties with operations in Russia, echoing similar choices by KPMG and PwC — a significant move by three of the world’s “Big Four” accounting and consulting firms.

The Big Four, which also includes Deloitte, handles the audits of most blue-chip companies. Their work and reports are often vital to obtaining international investor backing for their clients.

“In light of the escalating war, the EY global organization will no longer serve any Russian government clients, state-owned enterprises or sanctioned entities and individuals anywhere in the world,” EY said in a statement on Monday.

“EY has commenced a restructuring of its Russian member firm to separate it from the global network.”

EY noted it has over 4,700 staff in Russia, which has been part of its global network for more than three decades. EY stated that it was actively assisting 700 staff in Ukraine with financial support, relocation, transportation, and immigration services.

On Sunday, KPMG said that its Russia and Belarus firms would be exiting the KPMG network. The move will affect 4,500 partners and staff.

We condemn the Russian government’s military invasion of Ukraine in violation of international law. (1/4)

PwC also announced that PwC Russia would leave its network, impacting 3,700 partners and staff in the country.

“As a result of the Russian government’s invasion of Ukraine, we have decided that, under the circumstances, PwC should not have a member firm in Russia and consequently PwC Russia will leave the Network,” said PwC in a statement.

An update from our Global Chairman on our response to the Russian government’s invasion of Ukraine.#StandWithUkraine https://t.co/xCwikVsbeD

Deloitte said on March 2 it was reviewing its Russian operations and that it did not work for any entities within Russia’s central government.

Deloitte has not made any further announcements or decisions about ending work in Russia as of Monday.

Sanctions imposed on Russia by the U.S., EU, and the U.K. are pushing global firms to consider whether they should continue operating within the country. 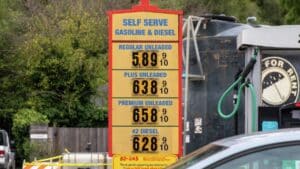 Oil Prices Surge to High Not Seen Since 2008