A federal judge has dismissed a lawsuit against Florida Governor Ron DeSantis over his administration revoking Disney’s self-governing power and signing a law that will dissolve the Reedy Creek Improvement District.

The lawsuit was filed by Will Sanchez, an attorney who is running for senate, along with three Florida residents who claimed that the move was politically motivated and will hurt taxpayers.

As expected, the Reedy Creek lawsuit against Gov. DeSantis has been dismissed by the court. The judge found multiple problems with it, first and foremost a lack of standing. pic.twitter.com/3h27AUTkGN

Judge Altonaga wrote in the ruling that the Court lacks jurisdiction over plaintiffs’ state-law claims because “state officials are immune from suit in federal court for claims arising under state law because ‘it is difficult to think of a greater intrusion on state sovereignty than when a federal court instructs state officials on how to conform their conduct to state law,’” citing Alabama v. PCI Gaming Auth.

Regarding Disney’s First Amendment rights, the judge wrote that “a party generally may assert only his or her own rights and cannot raise the claims of third parties not before the court,” with only a few narrow exceptions — which did not apply.

The judge additionally found that increased taxes due to the law are not a “credible threat of direct harm.”

“The challenged law does not apply to them, they do not allege direct harm as a result of the challenged law, and they do not plausibly allege any credible threat of direct harm in the future. Plaintiffs’ theory of standing is that the elimination of the Reedy Creek Improvement District might result in financial harm to Plaintiffs by virtue of a tax increase that has not yet been enacted,” the judge wrote. “That indirect and highly speculative alleged injury cannot support federal jurisdiction.”

Since 1967, Disney has operated its own government covering over 27,000 acres around Walt Disney World in Florida — known as the Reedy Creek Improvement District.

As Timcast explained in a previous report, under Florida law, Disney can control their own water, power, emergency services — and much more.

“I was shocked to see some of the stuff that’s in there. They can do their own nuclear power plant. Is there any other private company in the state that can just build a nuclear power plant on their own?” Florida Governor Ron DeSantis said during a press conference prior to signing the legislation. “They’re able to do certain things that nobody else is able to do. So I think they’re right to be looking at this and reevaluating and having an even playing field for everybody, I think is much better than basically to allow one company to be a law onto itself.”

Disney has become increasingly political, recently making headlines for loud opposition to Florida’s Parental Rights in Education law and suspended political donations in the state. In turn, the company announced that they will support organizations working to oppose the law.

Branded the “Don’t Say Gay” bill by opponents, the legislation does not actually mention the word “gay,” but rather prohibits the teaching of gender identity or sexual orientation to students in third grade and below. 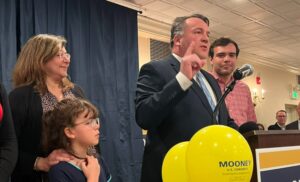