Though the administration maintains that prioritizing immigration enforcement is more effective, Judge Newman said 'the answer is no'

Arizona’s Mark Brnovich, Ohio’s Dave Yost, and Montana’s Austin Knudsen were among a group of attorneys general from various states who filed a lawsuit against the Biden administration regarding the immigration policy changes.

The premise of the suit was based on the Biden administration’s actions to end certain deportations of noncitizen immigrants based upon criteria like prior criminal histories.

District of Ohio Judge Michael Newman denied the Department of Homeland Security’s (DHS) motion to dismiss. The court granted a preliminary injunction, averting the administration’s enforcement and enactment of the civil immigration policies.

“The States sue because they believe DHS skirted Congress’s immigration enforcement mandates when it issued a policy that prioritizes certain high-risk noncitizens for apprehension and removal,” Newman noted in his order.

Further, in his written response, the judge asked, “Can the Executive displace clear congressional command in the name of resource allocation and enforcement goals?”

“Here, the answer is no,” Newman added.

“Since assuming office, the Biden administration has undermined our immigration laws and our law enforcement agencies while empowering dangerous cartels and criminals on both sides of the border,” Brnovich told the Daily Caller News Foundation. “I’m grateful for this ruling and for the partnership of Ohio and Montana as we work to reverse this catastrophic lawlessness.”

The Biden administration has maintained that setting priorities made immigration enforcement more effective. The administration has pointed to strategies such as targeting immigrants who pose a threat to their communities instead of people who have peacefully lived and worked in the country for years.

A later memo was sent by DHS Secretary Alejandro Mayorkas encouraging “discretion” regarding immigration enforcement. In the memo, he said, “It is estimated that there are more than 11 million undocumented or otherwise removable noncitizens… We do not have the resources to apprehend and seek the removal of every one of these noncitizens. Therefore, we need to exercise our discretion and determine whom to prioritize for immigration enforcement action.”

“The fact an individual is a removable noncitizen, therefore, should not alone be the basis of an enforcement action against them,” he added.

The Biden administration has proposed an immigration bill that would allow the legalization of millions of noncitizen immigrants currently living in the U.S. illegally. 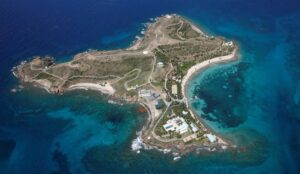 Epstein's Private Islands in the Caribbean Are Being Listed For Sale