A U.S. Appeals Court vacated a previous ruling this week on whether gun purchases can be limited for Americans under the age of 21.

The 4th Circuit Court of Appeals said their prior ruling in July was rendered moot as a result of the case’s plaintiffs turning 21, Reuters reported.

“Judge Julius Richardson said vacating the ruling he had previously authored would serve the public’s interest as it would make way for further litigation in the future,” reports The Hill. “In July, the court had ruled the 21 minimum age requirement to purchase a gun was unconstitutional.”

“Looking through this historical lens to the text and structure of the Constitution reveals that 18- to 20-year-olds have Second Amendment rights. Virtually every other constitutional right applies whatever the age. And the Second Amendment is no different,” states the ruling.

“The militia laws in force at the time of ratification uniformly required those 18 and older to join the militia and bring their own arms. While some historical restrictions existed, none support finding that 18-year-olds lack rights under the Second Amendment,” adds the judge. 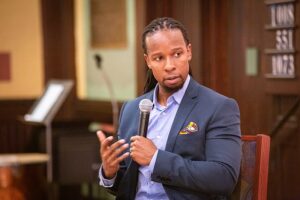 When Asked About Vaccine Mandates, Ibram X. Kendi says People of Color Do Not Have Access to COVID-19 Vaccine