On Wednesday, Facebook reported a loss in daily users for the first time in its 18-year history, alongside a loss of $10 Billion in revenue.

Zuckerberg told the Washington Post on an earnings call Wednesday, “People have a lot of choices for how they want to spend their time, and apps like TikTok are growing very quickly.”

In the quarterly earnings report, Facebook indicated a drop of nearly half a million daily logins during the last quarter of 2021.

Zuckerberg emphasized that their parent company Meta, which owns Facebook, Instagram, and WhatsApp, has been heavily focused on its short-form video Reels to compete with TikTok.

“This is why our focus on Reels is so important over the long term,” he said during his earnings call.

Facebook saw shares plummet more than 20% in after-hours trading on Wednesday. The drop follows unprecedented spending on its Metaverse project.

The company heavily invested in its newest Reality Labs segment during the final quarter of 2021, accounting for much of the profit decline. This portion of Facebook is focused on virtual reality headsets and augmented reality technology, designed for the newest MetaVerse project.

According to Investopedia, Zuckerberg, who is worth approximately $107 billion, held more than 398 million shares of Meta at the end of 2020.

Based on Wednesday’s after-hours trading, Zuckerberg personally experienced a more than $29 billion loss when the company’s stock fell.

Investors had expected signs of declining user growth. However, it seems the loss of ad revenue to TikTok was more intense than analysts had predicted.

TikTok appears to be monopolizing the short-form user-generated video market, despite Facebook and Instagram offering their Reels product.

According to Bloomberg, data indicates the platform lost consumers to TikTok and saw lower revenue from ads destined for its short-form videos. 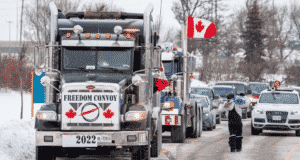 GoFundMe Freezes Over $10 Million in Funding From Canadian Freedom Convoy