The company is facing two major antitrust lawsuits in the US

The European Union has filed a complaint against tech giant Google alleging that the company misuses its advertising technology.

The European Publishers Council (EPC) said the company has an illegal “stranglehold” on advertising and the media. The EPC contends that the company’s ad suit is “rife with conflicts of interests” because it represents all parties involved in financial interactions, and therefore can exploit its control and profit at the expense of customers.

Google, which has been fined on three occasions for its ad practices, is also facing a multi-state antitrust lawsuit in the United States for illegally inhibiting competition through its market power as well as obligating consumers to make in-app payments from which Google receives a significant portion.

“Through its illegal conduct, the company has ensured that hundreds of millions of Android users turn to Google, and only Google, for the millions of applications they may choose to download to their phones and tablets,” New York Attorney General Letitia James said in a press release.

“Worse yet, Google is squeezing the lifeblood out of millions of small businesses that are only seeking to compete,” James added.

The company was already facing an antitrust lawsuit filed by 35 states “alleging that the company engaged in illegal behavior to maintain a monopoly on the search business,” per TechCrunch.

In a statement released on Feb. 11, the EPC asked “the European Commission to hold Google accountable for its anticompetitive conduct and impose remedies to restore conditions of effective competition in the ad tech value chain.”

“It is high time for the European Commission to impose measures on Google that actually change, not just challenge, its behaviour – behaviour that has caused and continues to cause considerable harm, not just to Europe’s press publishers, but to all advertisers and eventually consumers in the form of higher prices (including ad tech fees), less choice, less transparency and less innovation,” said Christina Van Thillo, the EPC Chairman. “Competition authorities across the world have found that Google has restricted competition in ad tech, yet Google has been able to get away with minor commitments which do nothing to bring about any meaningful changes to its conduct.”

“This cannot go on,” said Van Thillo. “The stakes are too high, particularly for the future viability of funding a free and pluralistic press.”

“This Complaint presents a unique opportunity for the European Commission to rectify the problems that have arisen as a direct result of its 2008 clearance of the Google/DoubleClick merger, by imposing effective remedies that will restore competition in ad tech, for the benefit of European press publishers, marketers, and consumers,” he added.

The EPC claims that since its acquisition of internet ad serving services company DoubleClick, the company has secured “end-to-end control of the ad tech value chain” and now controls as much as 90-100% of market shares in some segments of the advertising technology industry.

Shares of Alphabet, Google’s parent company, were down slightly on Friday in premarket trading, per Barron’s. 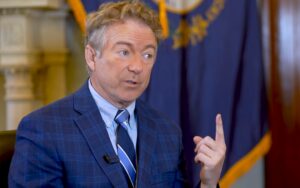 Sen. Rand Paul Says He Hopes for a Freedom Convoy in the US, Encourages Them to ‘Clog Cities Up’