'Given the lack of response by Twitter, the Reporting Person is exploring whether to commence a tender offer to acquire all of the outstanding shares of Common Stock,' the filing states

On Thursday morning, a filing with the SEC indicated that Elon Musk was prepared to make a tender offer to secure and close the purchase of Twitter.

In the 13-D filing, the amended offer and letter of intention state that Musk has secured financing and is no longer awaiting due diligence in his intent to purchase the social media giant. The filing states that Musk is ready to begin negotiations “immediately” in his bid to take over the platform.

The filing states that Twitter has not responded to Musk’s offer, resulting in his desire to enact a tender offer for the transactions:

“Twitter has not responded to the Proposal. Given the lack of response by Twitter, the Reporting Person is exploring whether to commence a tender offer to acquire all of the outstanding shares of Common Stock… at a price of $54.20 per share, net to the seller in cash.”

A Tender Offer often occurs when an investor proposes buying shares from every shareholder of a publicly-traded company for a specific price at a particular time. The investor typically offers a higher price per share than its stock price, providing shareholders a greater incentive to sell their shares.

According to the filing, Musk has secured $46.5 billion to close the purchase of the company, with Morgan Stanley leading his financing of the deal.

On Monday, Twitter filed a dividend distribution for shareholders with the SEC, allowing current shareholders to increase their ownership in the social media platform.

The 8K filing with the SEC gave insight into Twitter’s latest strategy to thwart Elon Musk’s effort to purchase the company. The company’s Board has been hesitant to entertain the buyout by Musk, and it remains to be seen if Musk will be successful in his bid to take over the social media platform. 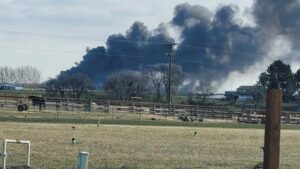 Strange Trend of Food Processing Plant Fires Appears Across the US