Twitter's CEO said, 'it's not even possible to know which accounts are counted as [monetizable daily active users] on any given day'

On Monday, three days after he said his deal to purchase Twitter was on hold, Elon Musk offered an update on his concerns and challenged information provided by CEO Parag Agrawal.

While speaking at Monday’s “All In” summit, Musk noted that a continued deal for Twitter is “not out of the question.” However, he went on to suggest it may close at a lower price.

Musk has consistently questioned Twitter’s publicly disclosed data on the percentage of spam and fake accounts on the platform. According to a report by Reuters and a public filing by Twitter, the accounts in question reportedly comprise about 5% of the total active accounts.

“The more questions I ask, the more my concerns grow,” Musk said at the Miami event on Monday. Musk then noted he believes the accounts in question comprise about 20% of all Twitter accounts. Musk’s comments were shared inthe day’s event feed online.

When Musk was pressed online about whether the deal would close at a lower price, he responded, “Maybe.” He also noted that he was “relying on public filings.”

Elon on Twitter $TWTR: “The more questions, I ask the more my concerns grow.”

Could it be done at a lower price? “Maybe.” (He didn’t imply that he’s negotiating, but the question was pretty loaded implying a negotiation. @elonmusk adds: “I was relying on public filings.”

Monday’s commentary by Musk came as Agrawal shared a public response to Musk’s allegations and questions about bots.

“First, let me state the obvious: spam harms the experience for real people on Twitter, and therefore can harm our business,” Agrawal said in his Twitter thread Monday. “As such, we are strongly incentivized to detect and remove as much spam as we possibly can.”

Agrawal said the company worked to eliminate more than half a million spam accounts daily from its platform. However, he stated that exact numbers and percentages of spam and bot-related accounts were impossible to provide.

“Unfortunately, we don’t believe that this specific estimation can be performed externally,” Agrawal noted. “Externally, it’s not even possible to know which accounts are counted as [monetizable daily active users] on any given day,” he concluded.

First, let me state the obvious: spam harms the experience for real people on Twitter, and therefore can harm our business. As such, we are strongly incentivized to detect and remove as much spam as we possibly can, every single day. Anyone who suggests otherwise is just wrong.

Agrawal also noted that there was a concern for the exposure of private data if the actual numbers were to be adequately assessed.

In response to the thread from Agrawal, Musk replied on Twitter with a poop emoji.

Musk also suggested that Twitter use traditional methods of information gathering to collect pertinent data. When Agrawal noted that using the private information such as ” IP address, phone number, geolocation, client/browser signatures” to track accounts, Musk said, “Have you tried just calling them?”

In the past few days, Musk noted that he would use a random sampling of 100 user accounts to determine percentages of real versus fake accounts. He was ridiculed for using a small percentage until it was revealed that this was Twitter’s approach to assessing account data. The revelation resulted in an accusation that Musk had violated NDAs related to the purchase agreement. Musk shared the news himself in a Twitter post on Saturday.

Twitter legal just called to complain that I violated their NDA by revealing the bot check sample size is 100!

On Monday, a filing with the Securities and Exchange Commission (SEC) confirmed that the deal continued forward momentum. Qatar Investment Authority filed a 13D disclosing their purchase of stock in the company, which is a portion of the group secured by Musk to help finance his purchase of the social media giant. 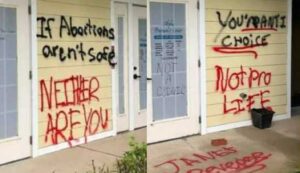 Second Pregnancy Center Vandalized in Maryland, Vandal Threatens: 'If Abortions Aren't Safe, Neither Are You'