Delta Air Lines has requested that the Justice Department set up a national “no-fly” list of unruly passengers barring them from getting on any commercial flights nationwide.

He further stated that the list would “serve as a strong symbol of the consequences of not complying with crew member instructions.”

Delta had previously requested an industry-wide measure to bar passengers from boarding commercial flights of any kind after an incident of disruptive behavior.

Delta has recently submitted over 900 passenger names to the Transportation Security Administration (TSA) in an effort to pursue civil penalties.

“While such cases represent a small fraction of overall flights, the rate of incidents with unruly passengers on Delta has increased nearly 100 percent since 2019,” Bastian wrote. “We fully support using the full force of the law in these cases.”

In 2021, the Federal Aviation Administration received 5,981 reports of disorderly passengers — 4,290 of which were mask-related. There were less than 1,100 reports of unruly passenger incidents in 2020.

Delta’s request this week follows Lauren Beyer’s statement in a House committee meeting that “there are legal and operational challenges with airlines sharing those lists amongst one another.” Beyer is a senior executive at the Airlines for America trade group.

The majority of unruly airline incidents are related to face coverings, which the Biden administration has mandated that passengers wear on board.

Since the mandate was issued, Delta has put 1,900 people on its “no-fly” list for refusing to comply with masking requirements. 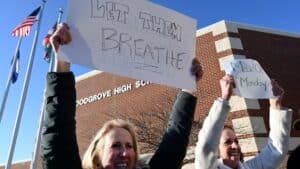