If reelected, Bowser would be the first three-term mayor in DC's autonomous history

Her challenger, Stacia Hall, is a Republican businesswoman seeking election for the first time.

If reelected, Bowser will be the district’s first mayor to hold three consecutive terms in the 47 years since DC gained autonomy. She was first elected in 2014 and faced no serious opposition during her last campaign in 2018, according to The Washington Examiner.

During Bowser’s time in office, the number of homicides has more than doubled — rising from 105 in 2014 to 226 in 2021, according to data from the Metropolitan Police Department. The MPD currently estimates that violent crime rates are 11 percent higher than in 2021, with a 17 percent increase in homicides and a 32 percent increase in robberies.

The mayor has pushed a number of initiatives to address the city’s homeless population. Since 2016, DC “reduced overall homelessness by more than 31.6% and has reduced family homelessness by 68%,” according to an April 2021 statement from the mayor’s office.

Bowser faced scrutiny last summer for her COVID-19 policies and mask mandate, which she violated during a private birth celebration in August. Photos of the mayor posing at the indoor event without a mask circulated online and earned the official a reputation as a hypocrite.

“If Muriel Bowser can’t even follow her own rules, why should others be forced to?” asked Republican Senator Marsha Blackburn of Tennessee.

If Muriel Bowser can’t even follow her own rules, why should others be forced to? https://t.co/QWceoJZMA8

The Ward 3 resident said the city is facing a public safety crisis.

“We can’t prevent crime — we can’t deter it — without good police,” Hall said. “As an African American woman, I was shocked, but yet unsurprised when we lost George Floyd… We must stand up against police brutality, but it does not mean we let criminals run wild.”

Hall also wants to expand school choice in the district and rein in government spending. 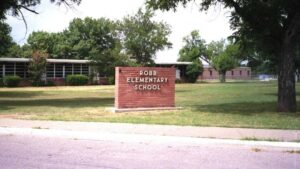 Robb Elementary in Uvalde, Texas To Be Demolished